All Kinds of Excitement around here!! 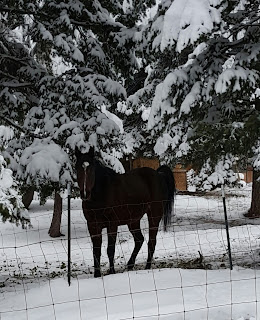 The first most exciting thing is I have a horse again!  This time she is a keeper for sure.  An Arabian!!!  My all time favorite breed of horse and only one I really want to own.  I felt such a connection to this girl the minute I laid eyes on her.  I feel so at ease around her, unlike the paint mare I had last year for a month.  I never did feel comfortable around her, even though I tried.  I am meant to own Arabians, that's all there is to it. :-)  She's a pretty bay in color.  It's hard to see in this picture, but she is beautiful!   Lark is her name. 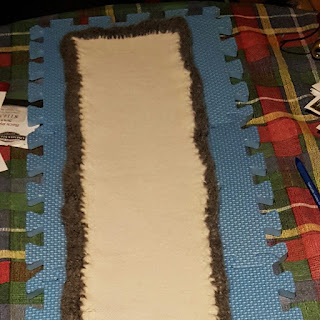 The second most exciting thing is I actually wove a scarf!  I made probably every mistake one can make doing this, I tried to cover up most of them.  It didn't turn out as bad as I thought it would.  I do have a very long way to go before I'm good enough to sell anything though.  It is fun, the rigid heddle is fast and easy to warp, it's portable, and it fits in this tiny house!  I think I will master it before I move on to a table loom or anything else.  Maybe I never will go past a rigid heddle loom, who knows.  I've been watching some youtube videos and one can do an awful lot with this kind of loom.

The third somewhat exciting thing is I re-opened my Etsy shop.  I've decided it's easier to do that than go through the hassle of finding another website host that can handle a real store on it.  I'll have my website for information mostly and the Etsy shop to sell what I make.  Which if you'd like a needle felted Christmas ornament to hang on your tree, I have a small selection, plus some stand alone needle felted animals, and a couple of crocheted cashmere items.  www.etsy.com/shop/PNFCashmeres is my shop.  Free shipping on everything in there now through the end of the year!  Please favorite the shop, even if you don't buy anything.  I think that improves my ranking on there.

Today John and I added a roof extension to the chicken coop.  I've been wanting to do that since about a month after it was built.  It's only been a little over two years in the making. :-)  Now the snow melt and rain water won't run inside the little door, and I won't have to shovel the snow away to open the walk through door to get in there.  The girls will have some snow free zone outside to go into when it snows.  They don't like walking in the snow, especially when it starts getting deep.  Now that there are 25 chickens in the coop, it's getting a little crowded, so they need some outside space that is covered.

Well, I think that is all the excitement around here for now.  Hope everyone had a good Thanksgiving!
Posted by Ann Keenan at 8:19 PM No comments:

It's been a while!

I hadn't realized it's been so long since I've been on here!  So much for me being consistent in my writing!

We got a new roof put on the house, got the garden cleaned up just in time, right before it snowed.  We got an early snow that doesn't seem to be leaving all the way.  We got over a foot!  The ground hasn't frozen, so it's slowly melting in, but not fast enough to disappear entirely.  The poor trees are leaning over, some have lost big branches, and there have been a few that totally uprooted.  I've had to cut quite a few down along the road just so we could get through.  We're down to about 6 inches left now.  It's been in the upper 30s the last few days, so it's very heavy now.  I heard a branch break this morning when I was out feeding.

I am going to learn to weave!  I'm going to start on a rigid heddle loom and see how that goes.  This house is so small, a bigger one just won't fit in here.  Once I get my craft studio up and going, then I might have room for a bigger one.  I'm pretty excited!  On Wednesday the guild I'm in is having a demo on rigid heddle weaving from a non weaver's viewpoint. I'm going to bring home a loom and see how it goes.  I went to my first weaver's meeting last Wednesday and wove just a little bit on a 4 harness table loom.  That was fun.  The warping is what has kept me from doing this before now.  I guess warping a rigid heddle isn't very hard or time consuming, so that is the main reason I'm starting with that kind.  We'll see how it goes. If I get good at it, I'll have another outlet for my cashmere.  Cashmere scarves made from handspun yarn from my own goats.  I'm thinking a shawl or two, too...

I'm slowly getting the fleeces washed and ready to send to the mill for dehairing.  I'm also doing some needle felted orders for people.  I'm making a Bolognese dog for someone now.  Then I have some mtn goat kid tree ornaments to make, then my 2017 bear ornaments.  Time is going by fast, I'd better get to it!  I can't believe it's November already!  Where did this year go?

Hope everyone is doing okay and have a great day!
Posted by Ann Keenan at 8:58 PM No comments: