Monday October 14, 2013 was a sad day around here.  Both Dottie AND Emily died that day.  Dottie was 13 and Emily was 14.  They were two of my seven original goats I got back in 2001.  I left early to go get a couple of bales of hay and saw Dottie standing outside with her kids looking around.  When I got back home about an hour and a half later and went out to milk, here was Dottie laying in the barn dead.  I guess she was out taking a last look around, saying good-bye to everything when I was leaving.  Boy did I cry while milking the other two goats!   Dottie and I had a special bond.  I always said it would be the saddest, yet happiest day when she died since she was such an ornery goat.  But, it wasn't happy at all.  I must say though, that the dairy barnyard is much more peaceful now with her gone.  Belle and Speckles get along fine.
At least Dottie lasted long enough for her kids to be old enough to wean.  The kids in this picture aren't her current ones.  I didn't take a good picture of her this year for some reason.  These are last year's kids.  I also didn't want her bred this year because she was getting old.  But, she took it upon herself to get bred anyway.  I guess it was a good thing, her daughter looks like she might end up being a good milk goat.  She doesn't have any cashmere and has a dairy look about her.  We shall see.  She is half cashmere.  Her brother looks like he's going to have decent cashmere.  Time will tell.  I do miss Dottie!   She gave me 19 kids and gallons of milk over the years. 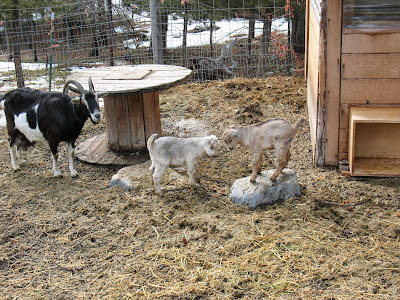 Then, when I went over to feed the cashmeres, here was Emily laying down and just about dead!  She was fine the night before, although she was slower than usual and hanging back a bit.  She did eat like she normally did and was acting okay.  I wonder if her and Dottie decided to go out together, since they died within hours of each other.
This picture is of Emily when she was 11 years old. 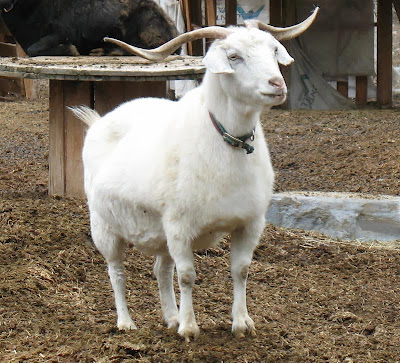 I spent most of the morning crying, then had an eye doctor appointment that afternoon.  My eyes were all red and burning, so I hope my new prescription for glasses works! :-)  The Dr. dilated my pupils, too, so I had a hard time seeing for the rest of the day.  Then after I got back home some friends from back east that were out here on vacation came up to visit.  I wonder what they really thought about the whole situation? :-)

So now I have 71 goats all together.   I finally have all but a couple of fleeces that are off older goats and bucks dehaired, so now I'm working on the fleeces for a couple of outside customers.  Then it will be time to clean up the machine and dehairing room and put the machine to bed for the winter.  One of these years I am going to have a well-insulated "real" dehairing room so I can work all winter out there.   A building big enough to house the machine, a washing area for fleeces, a little showroom for my cashmere items for sale, and enough space to set up spinning wheels so I can have spin-ins and workshops up here.  That is my goal.

I've had a good group of  helpxers this year.  Got quite a few projects done.  What a fun and great group of people they were!  Good workers and fun to be around and visit with.  I am so glad I signed up with that network.  Thanks to Heidi for telling me about it!  Help Exchange is the website.

I had some long-term, live-in helpers here for 3 1/2  months that did some thinning for me.  5.5 acres of the lower pasture were thinned.  Now I have 40 some slash piles to burn and a lot of clean-up to do.  I guess I should have been paying a bit more attention to how they were doing things.  Piling the slash under trees is not exactly the right way to do it.  Now I have quite a few piles that I need to move before I can burn them.  Oh well, live and learn.  I'm not having any more helpers that move in and live here,  that is too much of an invasion of privacy for me, even though they were down in the "round pen" area and living in their own camper.  I ended up losing Henry because they didn't secure their chicken and rabbit feed and 5 goats got into it, then didn't tell me right away that the goats did eat it.  It just doesn't work to have people live here, bringing all their stuff and totally moving in.  H&C were fine, they were set up for independent living, but these last people weren't really, and they had way too much stuff!
The helpxers are great, they come with a vehicle and some luggage and that's it.  They stay in the little camper I have set up as a spare bedroom, and are only here for a week or two at a time.  That works quite well!
It is nice to have the lower pasture thinned out, the helpers did do a good job of cutting out the trees, and the piles were nice and tight, just not in the right places.  After I get the piles all burned and the sticks picked up, I'm going to take all the grass seed I've saved from the hay bales and throw it out there.  Then take the moldy hay and spread it thinly over that and next spring I will have a great pasture.  The goats won't know what to do!  They will be able to see clearly and have lots to eat out there.
Well, that's it for now.  Enjoy the Autumn weather and the great fall colors.
Posted by Ann Keenan at 11:03 PM 2 comments: