I hope everyone is having a great Holiday season!  I had a good Christmas, going to a friend's house for dinner that afternoon.  I spent the morning digging out from the 7 inches of snow we got, then barely made it to dinner on time.
Yesterday I spent 4 hours plowing our forest service road with first the drag plow, then the ATV and plow.  I got a bit chilled out there!  But, I'm very glad I did it, because it's snowing again today and we have a "winter storm watch" till Monday morning.  Glad I got a bale of hay yesterday, too!  Now I can stay home for a few days till the weather improves.  Next up is another batch of seriously cold temperatures starting tomorrow night and lasting all week it sounds like.  Oh joy, back to the solid ice water troughs, etc.    At least the sun is supposed to shine some, so I hope I don't have to run the generator.

John's nephew Matt got married today.  They should all be at the reception now having a grand time.  I made them an afghan, I hope they like it!  Maybe some day they will come out here for a visit.  I hope so!

It is amazing how fast this year has gone by!  As usual, I didn't get half the things done that I was wanting to.  But, the most important things got done.  Now I can be inside more and doing fun things like spinning up the cashmere that I kept to make yarn with.  I sold most of it as cloud to fellow spinners, but I did save some to make into yarn.  Now I just have to do it! ☺  I'll have fun dyeing some of that, too.  I'm not an expert at it yet, so it's always somewhat of a surprise what color or colors it is when it's all done.  So far, (touches wood) it's always turned out good, anyway.

Well, have a great rest of the Holiday!  Happy 2015!  May everyone see their dreams come true!
Posted by Ann Keenan at 6:49 PM 1 comment: 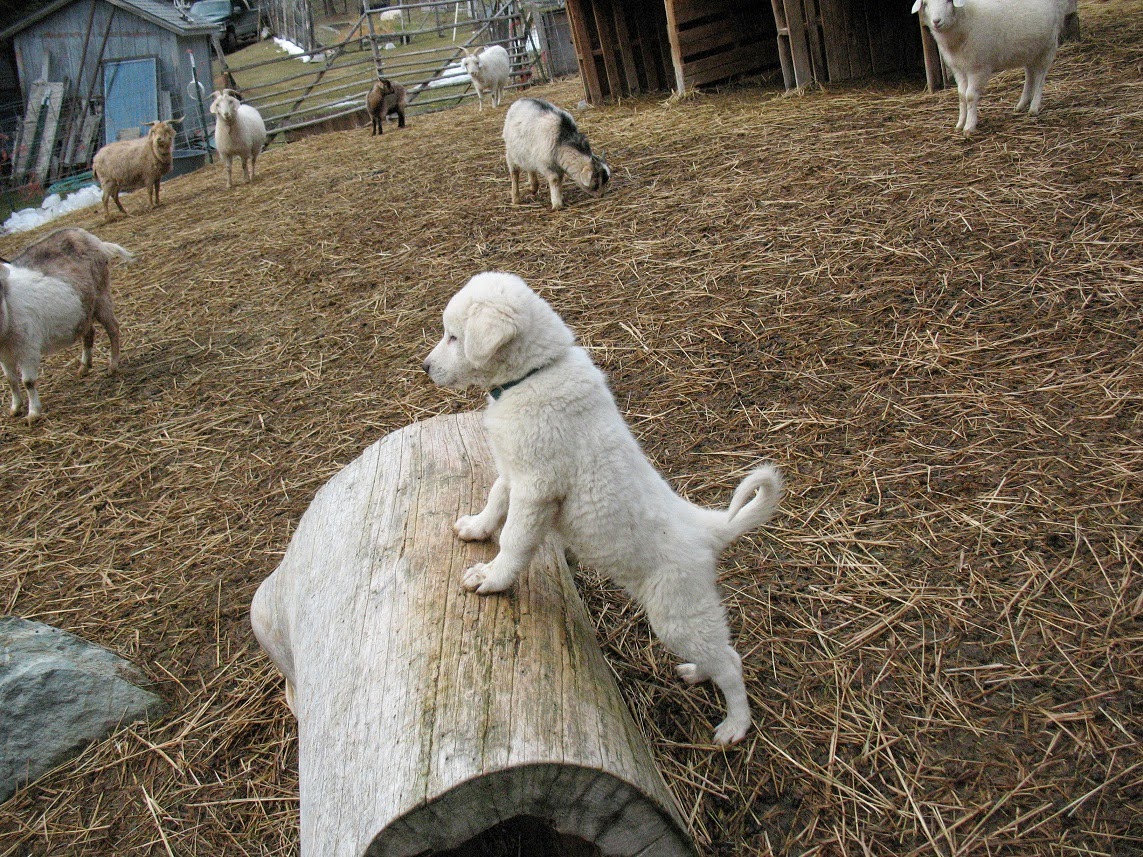 Here is Rocky, my new Akbash puppy.  He's 9 weeks old.  I got him a week ago Monday.  He's a cute little guy (soon to be big!)  He's already watching the goats pretty good.  I've only let him in with the goats a couple of times.  He's not quite coordinated enough to get away from the ornery ones fast enough.  He's been whacked by a couple of them pretty good.  So I'm keeping him out of the pens now, except when I'm right there and can keep the meanies away from him.
Sam is well loved in his new home.  They are so glad they got him.  So that whole episode ended well.  Now Rocky just has to grow fast so he can help Nellie guard the goats.  It's funny, Nellie barely looks at Rocky.  I think she is annoyed that he is here.  She figures she can guard things just fine by herself.  If she was younger, that would be true, but now that's she's almost 9 years old, she is going to need help just about the time Rocky is old enough to be of some help.  As soon as spring arrives, I'm re-doing the fencing around the goat pens and making an alleyway all the way around the perimeter of the pens so Rocky can run around the whole outside of them to keep the goats safe.  That way he won't be stuck in one pen if something is threatening another one.

This carrot I discovered in the garden when the snow melted off it last week.  I pulled it and another one I missed during the harvest.  A crab grass root was growing right though it!  I broke off the rest of it pulling it out of the ground.  Talk about a tenacious root! 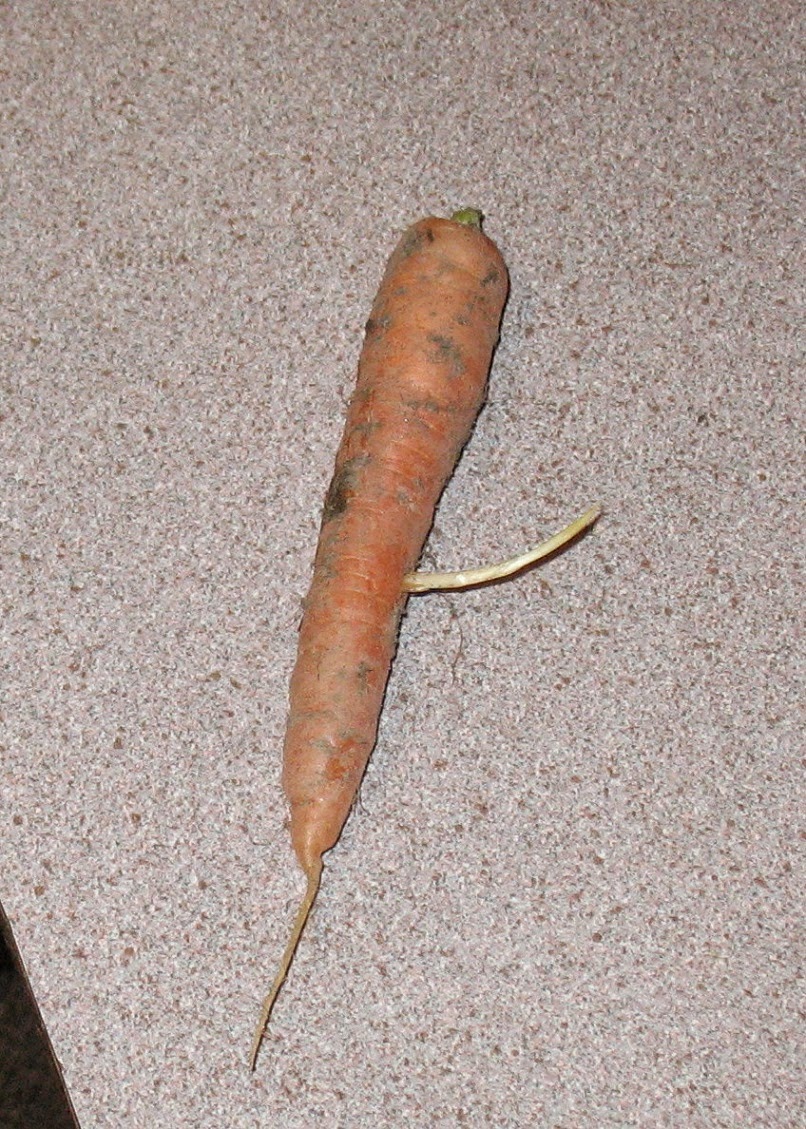 Today was one of those days when everything seemed to go just right.  The sun was shining so I didn't have to run the generator tonight.  I finally found a good source of excellent hay.  The animals all behaved themselves, and I had fun at the Alpine Weavers and Spinners Guild Christmas potluck today.   The only almost not perfect part was when I was unloading the hay.  It's a big square bale weighing around 1300 pounds.  It took a bounce, even though I was driving very slowly out from under it, and fell over against the dehairing room wall, and pushed the wall in a couple of inches.  I just about had a heart attack!  I was afraid the wall was going to collapse before I could move the bale away and fall on the machine.  That would not be good!  But, I got the bale moved with no more harm, and all is well now.  A scary moment though!

We've had some interesting weather lately.  Last week for three days it was 50° up here and a good 10 degrees cooler down lower.  I went to town on Friday and there was snow still.  We didn't have any up here, so I wasn't dressed for snow.  Then on Sunday I went down again with my snow boots, and all the snow was gone.  I was a bit over dressed. :-)  But now we are back to normal.  We have a couple of inches of snow on the ground now, and not much left down below at all.  It's colder again up here.   This week the temps have been perfect.  Mid-twenties during the day and upper teens at night.  We've had a couple of bouts of near zero temps to way up in the forties back to back.  That's hard on the animals.  I lost a yearling doe in the last one.  Not sure exactly what was wrong.  I don't think she was drinking enough water and got a blockage or something.  She went down fast.  That was a bummer, she had really nice fleece in a soft gray color.  I don't have many of the black goats with that color.

Well, that's all the happenings around here lately.  Seems there isn't ever a dull moment around here, something is always happening...
Posted by Ann Keenan at 7:29 PM 1 comment: