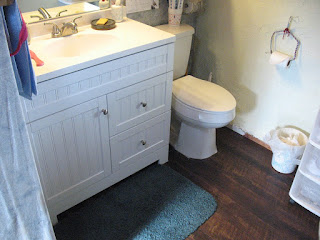 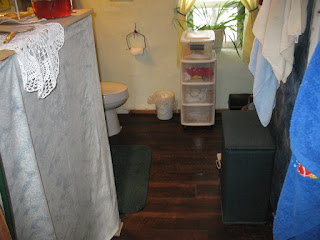 Our new bathroom!  After having carpet in there forever, the new floor is rather cold.  I am getting, or maybe making a rug for in front of the toilet.  I like the floor, though.  It looks pretty nice compared to what used to be in there.  The new vanity is really nice.  The first couple of days I kept thinking I was in a hotel when using it, it's so much nicer than the funky homemade one we've had up until now.  :-)  We've decided to do the kitchen floor in the same stuff, we like it so well.  It should look nice with our rustic wood cabinets and the wood cookstove. 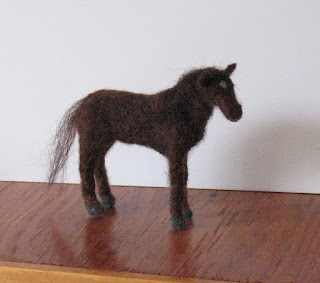 This is a needle felted horse I made for a friend of mine.  It's in the likeness of her horse "Sly Enterprise" her reining horse.  It's a pretty close resemblance.  I couldn't match the colors exactly, but it's all pretty close. I got the marking on her forehead right, so that counts. :-)

I'm glad it's warmed up into the 20's during the day and the teens at night.  That arctic air was just too much.  We didn't get as cold as other places around here.  We seem to be at the right elevation and in our little bowl that keeps us warmer than down lower, or up by Marion.  The coldest we got was around -12, and up by Marion it was down to -38!  The Valley got colder, too.  Last week when the valley was in an inversion for days and all cloudy and cold, we were basking in the sun and above freezing temperatures.  Life is good! :-)

I'm going slowly on the combing of the goats.  I don't like to take off their cashmere when it's cold, but they are letting loose of it, so I must.  They still have their guard hairs and some of the cashmere.  The one I've done so far is doing just fine and she's just a kid still.  For such a little goat, she had a lot of cashmere to give me!  It's got a nice fine crimp, too.  I'm glad I kept her!

Boy, the country sure is having some wild weather!  The tornadoes in the south, the warmer temps in the north, it's very interesting.  My prayers go out to the people affected by the tornadoes.  The animals, too.

After living in this house for almost 20 years now, (where did that time go??), we are remodeling the bathroom some.  We bought a vanity and new toilet, and also a new floor!  It's a slow process getting everything just right, but it's coming along.  I am really excited about the new floor.  It's a floating snap together walnut looking one.  I think it will be nice once I get it done.

We've had a few really nice, but cold, days now.  Sunny every day.  The snow is still light and fluffy, which is nice when shoveling things out.  The goats have adjusted to the cold temps, so they are all doing fine.  I'm going through more hay than usual.  Eating hay keeps their digestive tracts working, which creates heat in them.  So, I have a bunch of chubby goats now.  Better they have some extra weight than be too thin in this cold weather.  They are starting to really let loose of their cashmere now.  I'm hesitant to comb them, I don't want them too cold, but I also don't want to lose the fiber.  They will still have their outer guard hairs, so it won't be like I sheared them anyway.  It's supposed to warm up later this week, so maybe I'll start combing the ones who are the most ready.

Next post I'll have some pictures to show.
Posted by Ann Keenan at 8:56 PM No comments:

I think I am ready for spring now, and it's only the beginning of January!  We have quite a bit of snow, and the temperatures are colder on a more consistent basis than the last few years.  I seem to spend a lot of time shoveling snow lately! :-)   Our road is getting very narrow already.  We have the neighbors plow this weekend, so we are going to widen the road and get some turn outs on it.  For some reason, he only went up and down it once, even though we got 7.5 inches of new snow.   Right now it is almost 4 miles of narrow one lane with no turn outs!  We're out of luck if someone else is on the road!  Someone is going to get stuck.  So, I am going to widen the road and make some turn outs on it so we can get around each other.  I think it's time we bit the bullet and got our own plowing equipment and stop depending on other people to do it.  Now I just have to convince the husband. :-)

I've spent the last couple of days re-working my website and closing my Square store.  Now I have set-up PayPal buttons on my website so one can buy directly from my site.  One doesn't have to have an account with PayPal, either.  There are two easy options to follow.  I think I've been too scattered over the internet lately, so I consolidated and focused on my website.

I've been spinning more lately, too.   I have a stash of fibers other than cashmere, so I decided to work my way through them and see what I end up with.  I'm doing some needle felting, too.

The goats are doing well.  I have six girls bred for this year.  Babies will be due in April and May.  They aren't too happy with all the cold and snow.  There are little trails leading from their houses to the feeding areas with vast expanses of untouched snow everywhere else in their pens.  The bucks really haven't gone out into their pens at all.  A little trail to their water bucket and back to their house is all the area they go in.

That's all that is happening around here for now.  Hope everyone is safe and warm!
Posted by Ann Keenan at 9:25 PM 3 comments: 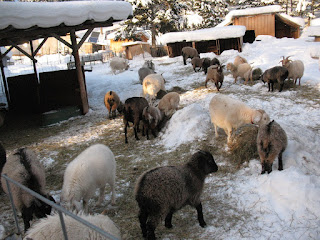 Winter 2017, more of a "normal" Montana winter than the last few years.  We still have milder winters than, say, Chicago, or Minnesota, or even the New England states.  At least Western Montana does.  The goats are full of cashmere and some are starting to let loose of it.  I will wait till it warms up a bit before starting the combing.  Below zero temps are too cold to loose one's winter coat just yet! 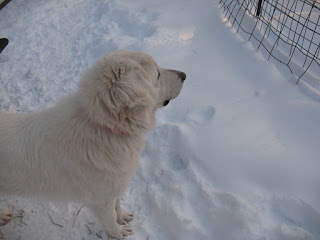 Rocky the Turkish Akbash looking out over the snow.  Him and his sister Cloud are very good livestock guardians.  Rocky takes his job too seriously sometimes.  He gets a bit nasty with his sister whenever anything is going on with the goats. 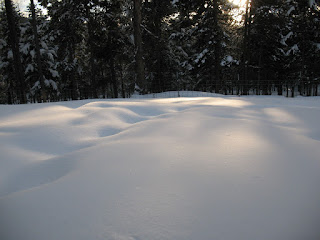 One of the buck pens.  You can tell he doesn't like to go out much when the snow is deep.  His private parts could get froze off!  The indents you see are from the dogs going out there before the last storm we had.  Jimmy hasn't gone past his water bucket all winter.  Below is the sunset tonight.  It wasn't spectacular, but it was pretty. 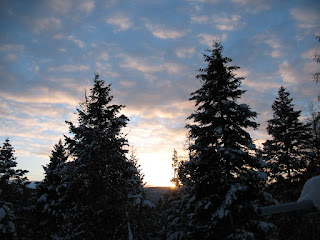