It was hot out today! 98 degrees in the shade behind the house.  That is a new all-time record high temperature for June.  We haven't had a good rain in almost two months now, and this is our rainy season.  The West is way too dry.  The East coast is getting lots of rain I hear.  Must be nice, you can send some this way, please. :-)

The goats don't seem to be minding the heat.  There are a few that are even laying out in it!  It was way too hot to be in the dehairing room today, so I did some needle felting instead.  I sure enjoy doing that.  The dehairing is going well, albeit slowly.  I still have over 20 fleeces to go.   This year I am going to spin up more yarn so the non-spinners out there can enjoy the luxury of American hand spun Cashmere.  I probably won't have any ready to sell till Fall, it takes a while to spin.  I have to get it dehaired first.  So far I'm working on orders already placed.  If you want some cloud to spin, please let me know soon.  I'm only offering a limited amount this year,  I have a lot of cream colored cashmere this year, not so much in the aspen colors.  There was a lower yield all the way around this year.  What I did get is really nice, though!

The turkeys and meat birds are not enjoying this heat.  They are laying around panting, not moving around much.  I've been carrying buckets of cold water out to them every few hours so they can at least get a cold drink of water to cool off a little.  If they wouldn't lay in a tight bunch under the trees, they might be a bit cooler.  They all lay together in a bunch, putting off a lot of body heat into each other.  There is a lot of shade out there, so it's not like they don't have the room.  I hope all the free ranging they are doing isn't going to make the meat tough to eat!  I'm feeding them organic food, and they are running around all over the place eating all kinds of goodies out there.  The bugs don't stand a chance!  I'd rather have happy birds that might be a bit tough, than unhappy ones stuck in a little pen not moving much and not enjoying life.  I haven't had any of the leg problems with the meat birds that I've heard they get.  These cornish cross birds are built rather strangely with huge legs and breasts, but they can move good and are cute and friendly in a chicken kind of way.  They sure eat a lot!  I'll be glad when they are in the freezer, but it's going to be hard to process them, I've grown somewhat fond of them and their cute weirdness.  I'll just have to think about how good they will taste, and the good life they've had up till that time.  With the bird flu epidemic wiping out millions of birds, I'm sure glad I got these this year!  I know what they've been eating, where they are from, and that they've had a wonderful life and they are healthy.  It's good to grow your own food!

The garden is doing okay.  The peas are growing slowly.  The broccoli is forming heads without stalks, which is strange.  The cabbage is starting to form.  I planted some beets and carrots last week and they are starting to come up.  I planted some zucchini last week, and tomorrow morning I'm planting some green beans.  The onions and garlic are growing well.  The spinach all bolted, so I'll pull that up and plant beans in there.

I got Cloud spayed last week.  She weighs 86 pounds at 8 months of age!  Rocky is bigger than her, so he's probably over a hundred pounds!  I sure am happy with these two.  Third time is the charm in the LGD realm.  They have bonded with the goats, they don't bark nearly as much as Nellie, who barks at every noise she hears, no matter where it's at.   They mind fairly well, although if they don't think what I'm asking them to do is a good thing at the moment, they ignore me.  They do come when I call them, which is the most important thing.  They know what NO means, too.  Right now Cloud is a yard dog till she heals up from her surgery.  Her and Rocky visit through the fence for now.  I will be glad when she's back out with the goats.  She gets into everything!  With her size, I keep forgetting there is a puppy brain in there still.
If I had to choose another LGD now, between the Great Pyrenees and Turkish Akbash, I'd pick the Akbash hands down.  Nellie is great, but she has always barked way too much.  Every time a neighbor makes a noise, she's barking.  The pups ignore most things unless it's on our property, then they bark and howl and yip.  All kinds of strange noises come out of them.  But, I know there is something out there on our place anyway.  They have shorter hair that is much easier to deal with than Nellie's.  Nellie is 10 years old in a few days!  Time flies.  It seems she was just a little white snowball not too long ago.  Dani is still going strong at 16, despite being almost killed three different times by Nellie the last few years.  When Nellie is anywhere near a bone, nobody can come within 20 feet of her without risking serious bodily injury.  Dani has all kinds of lumps and bumps on her, but she's doing well.  Can't hear or see very well, but she's still walking and trotting all over the place.  Her back legs get weak and she needs help going up steps sometimes, but other than that, she's good to go.

Well, it's cooled off enough to go out and do the evening chores.  Hope this hot spell ends soon!

Posted by Ann Keenan at 6:38 PM No comments:

I have got back into needle felting animals, and am having a blast doing it!  For some reason I got it into me to start doing this again, and they are turning out waay better than the first time I did them a few years ago.  It's amazing!
These are just two of the critters I've done so far.  A Boer goat and a Moose.  The moose is quite involved, there are a lot of interesting body parts on him.  After studying a lot of pictures online, I have come to the conclusion that there are no two moose that look the same, and even on the same moose, the antlers aren't symmetrical.  It took many hours to make him.  The goats don't take quite so long to do. 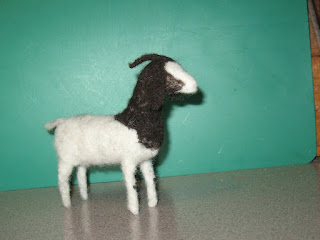 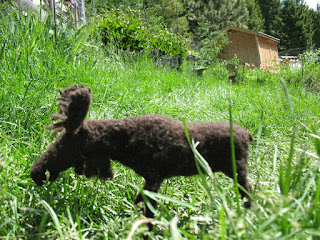 I am also in the middle of dehairing my cashmere fleeces.  I do have  some outstanding cashmere coming off my goats!  A smaller yield this year, I only have about half the number of goats that I had the year before, and they started shedding out a lot earlier this year, but didn't let loose of all of it, so there just isn't as much as I was anticipating.  When I went back to do the second combings on them, the cashmere wasn't  as good as the first combing, so I just threw most of it away.  I only want to sell and work with the very best of it, even for felting.  Luckily there wasn't very much that I needed to throw out.  Most of it did come off with the first combing.

The baby chicks and turkeys are all growing well.  The meat birds are almost big enough to process already.  I'm going to have a hard time doing them in, though.  They are somewhat friendly and are cute!  When I let them out of the "chicken tractor" to run around more, they just go bonkers at first, running around and flapping their wings.  Then they run over to me looking for their food, and I end up tripping over them trying to get to their feeder.  Good thing there are only 12 of them!
The 8 turklets are getting big.  There are 5 toms and three hens.  One of the hens gives new meaning to the term "bird brain".  She is always on the wrong side of the fence when the rest of them are going to new areas and can't seem to figure out how they got to where they are. ☺  I usually have to go herd her around the end of the gate, she gets within a foot of it when she's trying to join the others, then turns around and paces back the other way!  Going back and forth, so close, yet so far away...  Silly bird.
We have had record heat the beginning of the week, and then last night and today, it's cold enough I have the wood stove going!  Our usual June cold front is going through.  After this is gone, then I can plant the warm weather garden veggies.  At least we didn't get any snow this year!  There have been years when we got 8 inches of wet heavy snow that did quite a big of damage to trees and my flowers, etc.
All my peonies are blooming now, and the irises, too.  The yard looks rather pretty.    It smells quite nice out there with all the perfume from the flowers.
After the apple trees budded out way too early and froze in April, they are coming back with leaves now.  There isn't going to be much of a harvest this year, but at least the trees are still alive, and there is always next year.

The 5 kids are growing fast!  They are so cute, out there bouncing around and playing.  When I let the herd out into the woods to eat, they are tearing around out there jumping up and down on the stumps, logs and rocks.  There are two more Does that will have kids, one sometime this coming week, and one around the 10th of July.
I'm going to sell Spot, the white buck I have, pretty soon.  He's 5 years old, throws beautiful kids with excellent fleece, and he's related to too many of the does now.  Time for him to go to a new home and a new group of girls. I've got most of his doe kids, and they are some of the best looking ones out there.
Speaking of goats, I'd better get out there and let them out into the pasture/woods for the afternoon so I don't have to feed them any hay this evening.
Have a great day!!