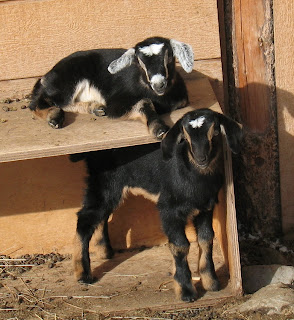 Here are the newest kids.  BB (for Baby Belle) and Samantha.  BB is the one on top laying down.  They were born on March 14th around 6pm.  BB was trying to come out backwards with her legs folded under her.  That wasn't working, so I had to reach in and push her way back in, grab a hold of her back legs, get them straightened out, and then pulled her out backwards as Belle was pushing.  She came out easily then.  Samantha came out in the normal way.  They are so cute and have such symmetrical markings on them.  Especially BB.

Spring is thinking about coming.  We get a couple of nice warm days, then it gets cold and snows again.  We are getting dumped on as I write this.  It's supposed to get down to 16 degrees tonight!  Kind of glad it is snowing so it covers up the tulips, daffodils and rhubarb that are starting to come up.  The snow will insulate them and keep them from freezing.  I think it is supposed to warm up again next week.  I hope so.  At least none of the kids are due during this cold snap.

I've started crocheting door mats out of the baling twine I get off the hay bales.  It's the thinner twine that the big round bales are wrapped with.  You would think that the door mats would be ugly, being made out of orange twine, but they are actually not bad!  I've made one, and am in the middle of another one.  The first one I made as a rectangle, going lengthwise.  This one I'm making a rectangle again, only going from the short side.  The first one is a bit loose, but it works great, except if you have the ice walkers on and the little spikes get caught in the twine.  Then there is the possibility of tripping.  I've had a couple of close calls.  But on regular shoes and boots, it's working great.

I'm almost done combing the goats.  I think there are only 4 left for the first round, then there are still a few that need a second combing.  I've started washing the fleeces.  It is amazing how much dirt is in one fleece!  The water turns a very dark brown on most of them.
The first of April I'll finally get the dehairing machine fired up and start getting all my fleeces dehaired and ready to ship out.  I've got quite a bit of yarn to spin, and a lot of cloud to get weighed out into the correct amount, bagged and sent out.  Things are starting to really get busy around here!

I hope we don't get more than a couple of inches of new snow.  I am ready for green and growing things now.  We have had a relatively mild winter this year.  I am not going to complain about it at all.  I didn't even have to put the chains on the truck this year!  Yay!! ☺  Although I suppose I shouldn't say anything yet, winter isn't completely over.  There have been years when we get more snow in March and April than in the whole rest of the winter.   I do hope that isn't the case this year.

Four kids have arrived so far.  3 doelings and one buckling.  Belle had hers yesterday around 6pm.  Two girls, one of which I had to push back in and grab her back legs and straighten them out, then pull her out backwards.  Belle's water broke, the water bag came out, then nothing.  I stuck a couple of fingers in there and felt two little hocks folded up against a little belly.  There was no way she was coming out in that position.  So, in between contractions, I pushed the kid way back in and got her in a good exit position.
The second one came out correctly. They are quite lively and very cute. I'll post a picture or two soon.  I named the first one BB, for Baby Belle, and the second one is Samantha.   Midnight throws some really nice kids!!  Lots of great fleece, good conformation, and a decent personality on each one so far. I'm really looking forward to seeing what all he throws this year!  He was the "main man" this last breeding season, so there will be mostly his kids out there pretty soon.
Now I get a break until around the first of April, then that week will be a flurry of activity.  10 does are due in the span of 7 days. Hope the weather is good that week.

The snow is melting at a good rate.  The frost has gone out of the ground now, so the water is soaking in good.  The rhubarb is poking it's little red heads out, and things are starting to turn green.  Now that the snow is going away, it's spring clean up time.  The dogs have scattered all kinds of interesting things out there that are now being exposed.  Pretty soon I'll be able to get the hoses out and end the bucket brigade for the year.   I did hear on the weather report that we are supposed to get some snow again next week, so I guess I won't get in too big of a hurry for green.  Spring in Montana can be interesting.  I do think we might have a rather dry spring, which will get everyone in an uproar about the upcoming fire season, but then we will get a fairly rainy summer.  We're already 1.3 inches below normal for precip this year.  At least down in the valley.   We still have a fair amount of snow in the woods. and on the flat areas.  The hill behind the house is completely bare now.
The robins are back!  I heard one this morning when I was out doing the chores.  Pretty soon I hope the pair of bluebirds we had last year come back.  I saw some down in Kila today, so they should be up here pretty soon.  I'd better get the old nest cleaned out of their spot.

Well, that's it for now.  I'll post some baby pictures soon...
Posted by Ann Keenan at 9:40 PM No comments: