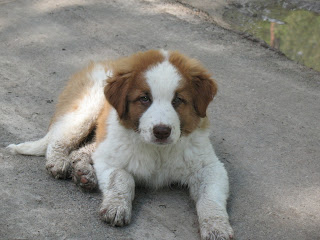 Meet Sam, my new LGD puppy.  He's half Anatolian, half Great Pyrenees/Australian shepard cross.  In this picture he is 9 1/2 weeks old.  He's already watching his kids, the three bottle babies in the next picture, and he's a pretty smart puppy!  He also has green eyes.

The three kids in this picture, Poppy, Lupine and Bart, are ready for their bottles, with Lupine getting pushed on by both of the other kids. :-) 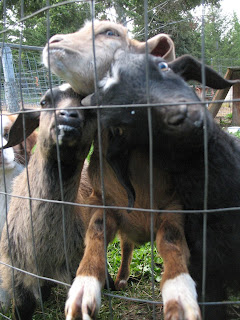 I have three helpers up here now.  Two are a couple with a baby that are living in a camper for the summer.    They are really nice people and great workers.  The other helper is here for three weeks.  She's from the helpx network.  My flower beds haven't looked this good in years!  She is a great weed puller, and she actually likes doing that.  This isn't the best picture to show the weeding job, but the peonies look pretty. ☺ 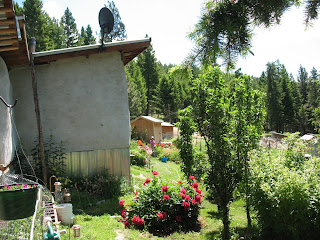 The goats are all doing well.  They go out into the woods almost every afternoon now and eat their fill of goodies.  I have actually got all the Aspen colored fleeces dehaired now, and am almost ready to start on the cream and white fleeces!   I just need to finish up the "leftovers" of the aspen, then I'll start in on the others.  The leftovers are the stuff that falls into the waste bin on the machine on each pass.  It's still beautiful usable fiber, just not the prime cashmere that I sell to my customers.  It has a little shorter of a staple length, which makes it not quite as easy to spin although it still makes very nice yarn.   I just combine it all so it makes a different shade than the individual fleeces are.  Kind of in between the two.

We've been in a heat wave for the last few days.  I now know what working in a sweatshop must be like for all the foreign textile workers!  My dehairing room gets quite hot and stuffy, even with a fan going in there.  The motors on the machine put out quite a bit of heat!  In the winter that is a plus, in the summer, not so much.
Have a good 4th of July and be safe!

Posted by Ann Keenan at 5:35 PM No comments: