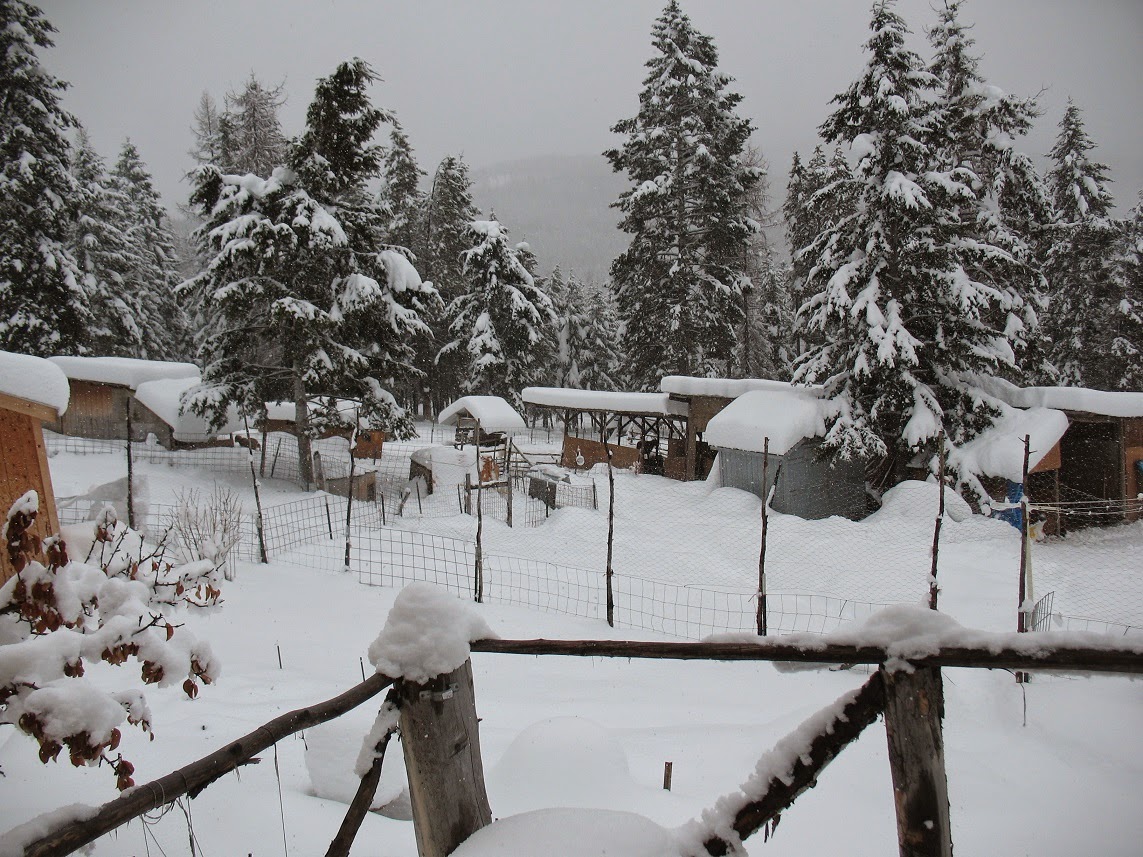 Well, winter didn't leave after all.  I am almost snowed it!  It is snowing again tonight.  Our new neighbor bought a plow this year so we wouldn't have to hire someone to do the plowing, but he doesn't quite know what he's doing, so now the road is an extremely narrow tunnel, with only a couple of turn-outs on the entire 4 mile stretch!  We are going to have to hire someone with a bulldozer to widen it.  Cha-ching!

In a weak moment I got another puppy.  This time she's a tiny little Russell Terrier, which are smaller versions of the Jack Russell Terrier.  The cat is bigger than she is.  As you can see from the picture, Nellie isn't quite sure what to do with her.  I named her Dottie, she has one brown dot on her white back.  Since my dairy goat Dottie is deceased for two years now, I figured I could recycle the name.  RT Dottie is one feisty little girl!  She has a temper on her.  Reggie the cat and her play together, wrestling and rolling around on the floor.  Reggie either bit or clawed her a little too hard today and she went right after him, growling and biting.  They got into a fight that I had to break up!  Silly kids. :-) 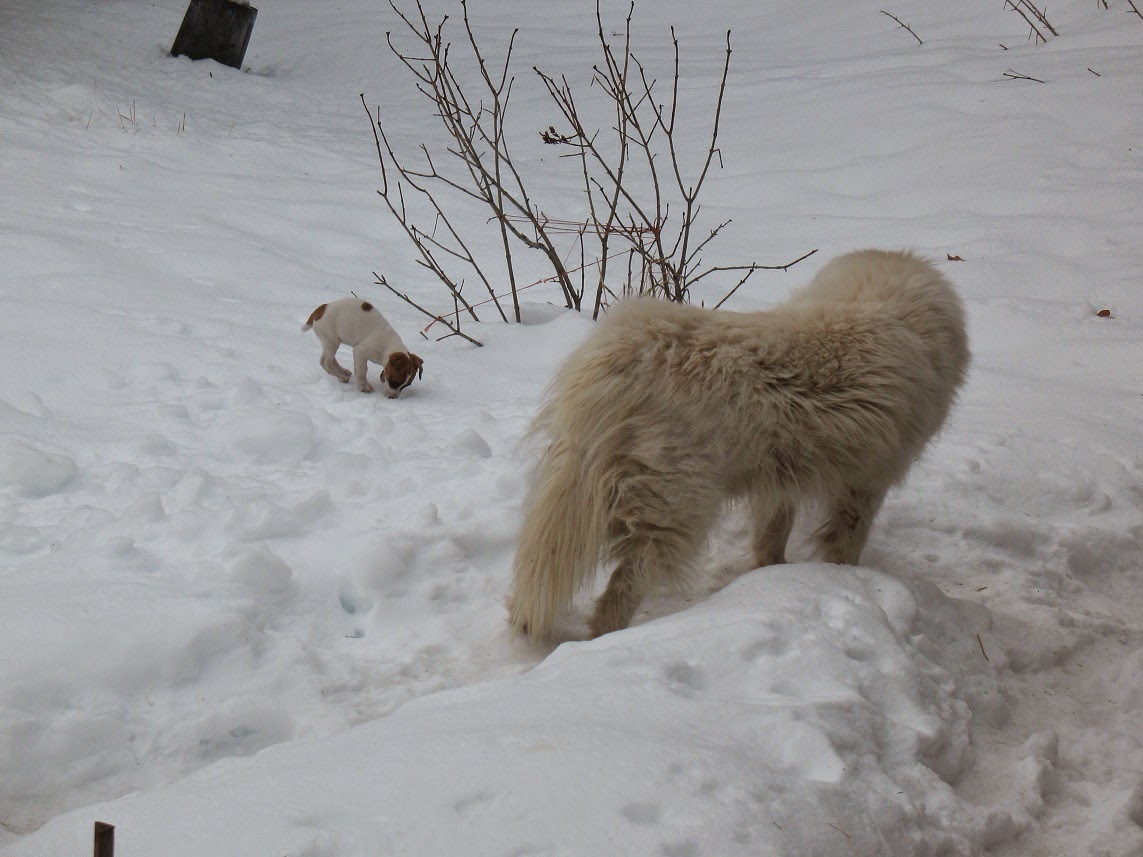 Rocky is growing, and he likes to play with Dottie, too.  He's a bit rough with her sometimes, but she holds her own.  She goes out with me to do the chores and that's when I let Rocky out of his pen, so he can run around and come into the goat pens with me when I'm feeding.  Dottie just runs around in between and under the goats, and they pretty much ignore her.  Lupine butted her gently today, and Dottie went after her!  She does not take anything from anyone. 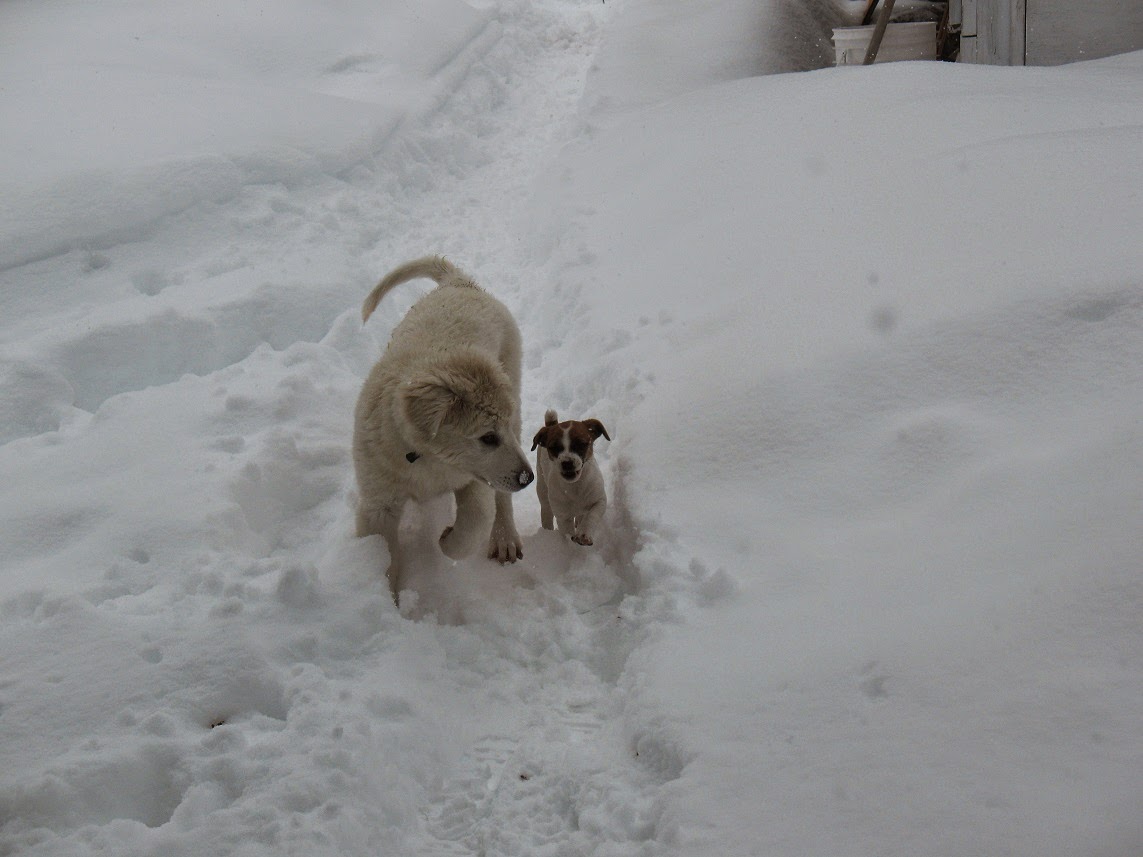 Dani is still hanging in there, she's getting weaker, her back legs don't work as good as they used to,  I have to help her up the stairs most of the time.  I got Dottie to replace Dani, and I was hoping Dani would teach Dottie some manners, but she pretty much avoids her.  Dottie is the littlest creature on the place, and she has pretty much taken over!

There are only 5 pregnant does out there this year.  It will be one of the smallest  kid crops I've ever had.  They aren't due till April and May.

I've been busy spinning and crocheting lately.  Almost done with all the cashmere that was left, which wasn't very much, actually.  Kits with patterns and the yarn to make them will be coming up soon. I've designed a couple of patterns that can either be a scarf or a cowl.  I'm also going to have some wrist warmers, too. I got a bit behind with it all, spending three days shoveling and plowing out the place from the last storm.  Hope this one doesn't drop as much snow!  I've barely recovered from the last one!  One thing about it, living up here I sure don't need to belong to a gym to get a good work-out.  ☺

I hope everyone has a wonderful, spectacular 2015!
Posted by Ann Keenan at 8:25 PM 3 comments: