It finally rained today!  Now the forest will grow and the goats can get out to eat by the week-end.  They ate the yard down fairly fast!  If the deer would stay out of our property and stay out in the forest service land, it would be even better.  I don't know why they have to come in here, when there is far more grass and food out in the woods.  I guess they feel safe in here.  I think one deer eats as much as two goats do. 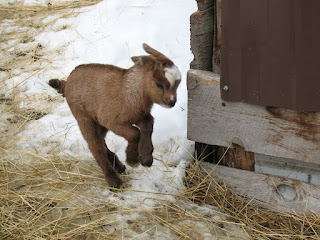 I have 69 goats now, counting both the dairy and cashmeres.  The kids are way too cute.   Here's Flash when he was about a week old.   Then there's Otis jumping onto the rock and promptly sliding off the other side.  Between the hollow log and the rock, the kids keep themselves entertained pretty good. 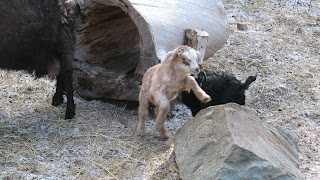 The garden is is starting to grow.  I've got carrots, beets, lettuce, radishes and garlic planted so far.  This week the spinach and broccoli will go in.  I have some salad greens and peas growing the the greenhouse this year.  So far, I've had two salads.   The asparagus is up and I'm eating that almost every night.  A great way to fix it is to saute' it in a mixture of coconut oil and butter with a little onion and when it's tender sprinkle some goat cheese on and a splash of soy sauce,  Yum!!  I also have cooked a chicken breast, chopped up, with it, and put it over the salad greens.  That was really good!


Now that my interns have moved on to their next adventure, I'm looking for someone else to come along that would like to learn about cashmere goats, and the off-grid lifestyle.  We have 20 acres, gardens, goats, and chickens.  It would be nice to have a couple again.  I'll share the food we grow here with you, (lots of goat milk, etc,) but we don't have any guest quarters yet, you would have to have an RV of some kind.  There is a good flat spot to park in that is private, yet close enough to walk up to easily.  If you want to take a working vacation for a couple of weeks, and don't mind a little bit of somewhat hard work, you are welcome to come for a visit.
The things I need help with are cleaning the pens, gathering firewood for next winter, and some gardening.  I need to spend more time in the dehairing room and working with the cashmere fiber, so I need someone to get these other things done.
We are only two hours away from Glacier National Park, one of the most beautiful places on earth.  It is a good day trip from here if you leave early in the morning and don't get back till almost dark. ( I've done it many times)  We live out in the middle of the mountains, with one other neighbor that is close by, up a forest service road that's in pretty good shape.  We're 45 minutes, or 21 miles,  from Kalispell, and the Flathead Valley.  There is lots of wildlife up here to see, too.
My husband is working back east till this fall, at least, so I'm trying to do everything by myself, and it just might get to be a little overwhelming.  I do not want anyone who uses drugs of any kind, or drinks alcoholic beverages in excess.  A nice, responsible couple in good physical shape that is not afraid of working outdoors, and that likes goats, would be perfect.  Kind of like  H&C were! :-)  And, if you know anything about solar hot water installations, that would be really great!

Well, it's time to go out and feed everyone, water the greenhouse and get things all shut down for the night.  One thing about having the greenhouse, it needs watering even if it's raining out.  I"m going to have to figure out an irrigation system to get run-off from the roof inside and watering things when it's raining.
Posted by Ann Keenan at 5:10 PM 2 comments:

What a beautiful day we had today!  I spent most of it weeding and landscaping the gardens and yard.  Tomorrow it's back to dehairing my cashmere.  It's looking like I won't be able to get all of mine done before the outside cashmere starts coming in. I've got 36 fleeces to do.   But, I'll get enough done to fill the CSA orders and a little more, then do others, then go back to mine.
I have 69 total goats now.  11 dairy and crosses, and 58 cashmeres.  The kids are all doing great.  I'm only keeping two of the boys bucks, the rest are getting "wetherized".  One of them is white with a silver dollar sized spot on his neck, and the other is a pretty shade of brown with some neat looking facial markings.  Both are nice square bodied kids.  The white one is really stout.  He's a chunk.  He'll make good meat babies, along with the fiber.  His parents both have outstanding fleece, so he should, too.  The brown one isn't quite as stocky, but he has nice conformation and is just cute. :-)  He comes from parents with great fiber, too.  When I get decent pictures of them, I'll put them on here.
The baby chickens had their first day out in the big world today.  They weren't quite sure what to do at first, but by the end of the day, they were having a grand old time out there.  They are big enough now that I don't have to worry too much about a raven or hawk picking them off anymore.  I'm so used to the Jersey Black Giant chickens we used to have, that these are looking a bit strange.  They are Silver Laced Wyandottes, with two Golden Wyandottes in there as well.  The golden ones are really pretty!  I might have to get a couple more of them.  It's nice to have something besides black in the poultry department around here.  I'll be ordering turkeys again here pretty soon.  I have a few people that want me to raise them a turkey or two, plus we want some for ourselves, too.  I'm going to get some Naragansett ones this time.  They are a heritage breed that gets to a medium size from what I've read about them.  Somewhere around the 18 to 25 lb range.  I might keep a breeding pair and let them raise a hatch or two.

My daffodils are blooming nicely, and the tulips are about to start.  There are over 100 buds in the tulip garden again.  It's going to be pretty!   I'm going to start planting the vegetable garden this coming week.  We had a couple of really good frosts this last week, so I'm glad I hadn't planted anything yet.  I got the beds all ready to go.  One nice thing about raised beds is they don't take long to get ready for the new season.  The Square Foot Gardening method really works good, too.  It's surprising how much food you can grow in a small space using that method.

Well, Happy Mother's Day to all the mothers out there.  Have a great day!
Posted by Ann Keenan at 9:49 PM 1 comment:

Here is Zindy Lou with her first kid.  She's a very nervous mom and is always checking on him and calling out to him if she is more than 10 feet away.  I named him Drizzle.  It was lightly raining at the time I first saw him.  I went out in the morning to check on her and here he was, up and dry and nursing.  I had been worried she would have trouble having him since this was her first, but obviously she had no problems.  Thank heavens!  I was hoping for a gray kid, since she's the only gray goat I have, but he's solid black, not a white hair on him.

There are 28 kids all together now.  They are more entertaining than TV!  I have some nice colors out there, too.  I was wanting more black kids so I'd have the various colors, and now there are 7 of them.  They are getting hard to tell apart.  Two of them are solid black with no white hairs at all.  Both boys.  One is going to be a little leggier than the other, so that will be how I tell them apart.  That, and putting different colored collars on them.
There is a good range of shades of brown out there, too.  So far the girl/boy ratio is even.  That is unusual.  Most years I have an abundance of boys.  Especially with this many, but not this year.  I'm glad!

The interns leave this week-end!  They've been here for 8 months now.  I think they've experienced just about every aspect of goat raising and farming.  From breeding, to kidding, to having to put a couple of them down, to butchering one, to harvesting the cashmere fiber, even milking them.  I think they now know a whole lot more about goats than when they arrived. :-)  They also learned how to butcher chickens.  A well-rounded venture into the world of goats and homesteading.  I'm going to miss them!  Now they are on to their next adventure en route to their own place some day.  I wish them well!  Heidi is on her way to becoming the best Special Ed teacher out there, and Colin is a wonderful carpenter and worker.  They have both been a huge help around here.  They made surviving winter around here much easier this last year.  I'm pretty sure I got the better end of the deal, too.  A remodeled kitchen, a closed in combing room for the goats, all the roofs vertical again after the 2010-11 winter made them all lean.  A new dehairing room door, lots of help with fencing, pen cleaning (especially pen cleaning!), flower beds weeded, a whole lot of clean-up out in the woods/pastures picking up sticks and thinning out the trees, the ability to do a little traveling without worrying about this place.  That was especially nice!  It was so nice to have help around here!  People that actually like the goats and have respect for them.  Thanks you guys!!!  It's been great!

I'm waiting for the last two does to have their kids, then kidding will be over for this year.  I'm starting to think the one doe isn't pregnant anymore.  There is no milk in her udder, and no bulge in her side at all, at least not enough to be a kid, I don't think.  We'll see by the end of next week.  The other doe is definitely pregnant, though.  Hope the boy/girl ratio stays even!
Well, that's it for now...