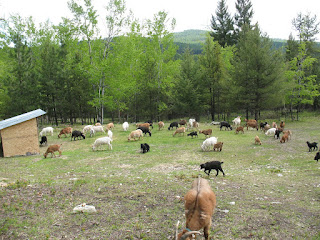 The goats are enjoying the freedom of being out in the pasture, especially this area, as you can see it's already eaten way down.  They head here first, then move out around the rest of the place.  This used to be a round pen when I had horses, and then it was just pasture, then the bus was parked here when H&C lived here, and now it's back to pasture.  I've been taking the goats out into the neighbor's places to eat, too.  Good for reducing the fire hazard out in the forest.
We've had a lot of rain this month.  I think we are 3 inches above normal for precipitation this year now.  It's rained almost every day.  Makes for lots of food for the critters anyway.  I haven't had to water anything but the greenhouse.  I need to figure out how the best way to get the rain water off the roof into the greenhouse when it's raining so I don't have to water anything.  I have a couple of ideas, I just need to experiment and see what happens.
The garden is still waiting for warm weather to really take off and grow.  I haven't even planted most of it yet.  Later this week it's supposed to warm up finally, then I'll plant.  The peonies are about to put on their show.  They are such pretty flowers.  The columbines are starting to bloom now.
The grass is getting out of hand in the garden and inner yard.  The weed-whacker decided to quit working last week, and I finally got it into the repair shop today.  It won't be ready till next week, so I'm going to have a hay crop for the goats when I do get all the grass cut, it's getting so long.  It's even going to seed!
With all this rain we are going to have a bumper crop of raspberries this year.  The apple trees all have a ton of blooms on them, too.  Apple cider, applesauce, pies, and all that good stuff this fall!!  Yum!

The Bluebirds that nested in the eve of the house have hatched out some babies.  I can hear them yelling when their parents bring them food.  Sounds like a full nest in there.  This is the first time we have ever had bluebirds up here.  They usually like more open field areas.  I guess we are open enough for them now.  I hope they all survive.  That would be neat if next year a whole family returns!

I have a couple of different helpers coming from HelpX now.  One couple is coming in mid-July and one is coming mid-August.  Now if I could just get someone here the first parts of July and August, that would be great.  There is so much to do around here, it's almost overwhelming.  Not quite, but almost.

I've tweaked the dehairing process and prices again.  It is just too slow of a process to be able to make any money at.  That is why there are so few mills that dehair cashmere.  If I were to even  come close to making a profit, I would have to charge at least $6 an ounce.  That would be way too expensive for the growers to pay and be able to make any profit on the sale of their cashmere after they get it back.  So I think the only way the cashmere business in this country is going to go anywhere is to have a few people go in together and get a dehairing machine, and just do whoever buys into the machine's cashmere.  If little groups in all the regions did this, then the mills around the country could spin it up fairly fast and the American Cashmere grower would be able to have a good business and make a decent profit.  Give the foreign cashmere a run for it's money.   The machine is not hard to run.  It's a very slow process, so one has to have patience, but it's interesting to put it into the machine and then see how it looks coming out the other end.  It helps to have a window to look out of, too. :-)
I also do not know why anyone shears their goats.  It might save time on the harvesting end, but you lose any advantage there during the dehairing process.  It takes way longer to run through the machine, and the yield is so low compared to combed, I see no advantage to shearing.  Since you pay on the incoming weight, and at least 60% of that weight is guard hair, which gets thrown away in the process, it's like you are just throwing money down the drain.  Plus, if you have to pay someone to do the shearing, you are really losing money.
I know I've only been doing this dehairing thing for about a year and a half, but I've seen a lot of cashmere in that time, both combed and shorn, and the combed is the way better deal.  It's got a better return, it's faster to dehair, and there isn't so much waste.
Well, that's my humble opinion on it, anyway.  :-)
Happy Summer!!
Posted by Ann Keenan at 9:53 PM No comments: