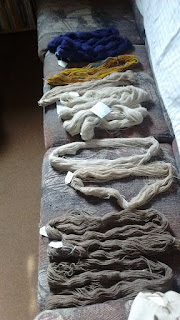 Slowly, but surely, I'm getting some spinning done.  I've even dyed some of this.  My photography skills leave something to be desired, but someday (soon I hope!) I will have a real craft studio where I will have room to set up an area to take proper pictures of my work.  A place to set up all of my equipment and have things arranged so I can actually find something when I need it, instead of spending wasted minutes looking for it, sometimes finding it, sometimes not.  At least I have room for the really important spinning wheel!  Right beside the computer, so when the computer decides to take a nap while loading something, I can have a productive moment or five of spinning while waiting. ☺

Today was the first day of the general hunting season for big game.  It is bucks only in the deer department, so since there are very few of those up in this area any more, I didn't hear any shots fired.  Yesterday John and I went out and spent 3 hours working on the forest service road getting it ready for winter.  It was graded this fall, but the grader left a ridge of dirt clods and gravel along most of it, and especially in the turn-outs, so we cleaned it up and made it smooth so the plow wouldn't break hitting all of that when it's frozen.  The road is nice and wide and quite smooth to drive on.  It really needed work, it had been 6 years since it was last graded.  Lots of traffic and some torrential rains made for a rough road.  It's all better now.

The thinning project is all done, except for the slash burning, so the forester is coming out on Monday to inspect and hopefully approve it and sign off on it.  Then we will sign up for another section, maybe the rest of the property, for next year.   Our place is shrinking!  I can see the fence line from the goat pens now.  Before it was so thick out there, one couldn't even walk through it.  The goats are going to love it next year when they get out into that area.  They will be able to see clearly, there will be more vegetation to eat, and the predators have nowhere to hide in there.  Good things all the way around!

I am having all kinds of buck challenges this fall!  It's time to invest in some new fencing and get these guys fully contained again.  Today Midnight was out running with the herd!  I don't think anyone was in heat today anyway.  I wrote it down just in case.  What's that saying about the best laid plans of mice and men?  It seems not much is going according to plan this fall.  Oh well, I'll just go with the flow, remembering that everything happens for a reason, and not stress out about it all.  I might live longer that way. ☺  The goats enjoyed running out and eating the aspen leaves that are falling all over, munching on the slash piles, and then coming back into the pens and eating the wasted hay in each other's pens.  Saves me having to feed them hay in the evenings.  They were all looking quite fat tonight.
Here are the Akbashes at a year old.  Hard to believe they are 1 year old already!  They are pretty good guard pups/dogs.  They have bonded with the goats and stay with them all the time.  Rocky is the one sitting and Cloud is laying down.  They get into some pretty loud fights at least once a day.  For being a brother/sister duo you would think they would get along good, but they really argue a lot.  Fortunately there is rarely any blood, just lots of growling and yelping.  Cloud is spayed, and Rocky is going in to get neutered next month. Hope that calms things down a bit. I wonder how much they will weigh when they are fully grown.  They are right around a hundred pounds now.  They eat a lot of food!  It's nice not having to bend down to pet them. :-) 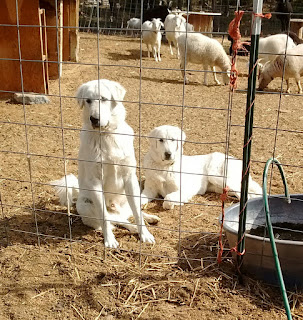 This week I finally entered  the world of texting.  Yes, most people have been doing that for seemingly ages, but I am somewhat resistant to being too connected.  I like being up here on the mountain, isolated from most of the drama and angst out in the big world.  But, as more of my friends and relatives keep asking if I text, and that it would be so much easier to keep me "in the loop", sending me pictures and things, I decided to jump in and get a smartphone.
We got a new phone plan, doing away with the "home phone" cell plan and John getting rid of his number he had back east.  Now I have the home number on my phone, and he has my old "traveling" cell phone number.   More phones added to our cell phone "museum".  We were one of the first people in the Flathead Valley to get a cell phone, even got to pick out our own phone number way back in 1994.  That really isn't that long ago, but it seems like it.  Amazing how fast and far technology has come!  That first phone was called a "bag" phone, and it was like a brief case size.  Not all that portable, no carrying it in your pocket or anything, but it worked good.  Then the phones got progressively smaller, and now they are getting bigger again.  Funny how that works.
For being so resistant to it, I seem to be doing a lot of texting the last few days. :-)  It is nice to have more contact with my relatives that aren't close by.  Which is all of them, since the closest one is a good 8 hours away.  Most being at least 11 or more hours away.  It's easier to contact some of my friends, too.  So, I've entered the modern world.  Now I just need to become smarter than my smartphone.  I'm figuring it out fairly fast I think.  I know how to answer the phone now.  I have a Motorola, and one has to swipe it sideways to answer, not tap it.  So if you call me and I don't answer, it most likely means I didn't do it right. :☺  It also doesn't ring every time, which I'm not sure why.  Today someone called and the phone was right beside me and it just buzzed once after the person left a voice mail, no ring at all.  Not sure why it did that, but hopefully I'll get it all figured out soon.

On to farm life...  The new chickens, the pullets, are really laying eggs now.  They are so small compared to the older girls' eggs.  They taste good, which is all that really counts.  They'll get bigger as the hens age.  Helpxers built a new coop for them with three nest boxes.  The hens were using the boxes just fine, then they started laying them all over the place, so John and I took the double nest box out of the other coop, since those girls quit laying in it, and put it down in the new coop.  Now the hens are laying in that one, and still in the corners on the ground, and quit using the three original boxes all together.  Maybe the triplex needs a bigger lip on the edge so the hens don't feel like their eggs will fall out.  It's two inches high, but they aren't using it anymore.

The does are starting to come into heat big-time, so the bucks are making all kinds of strange noises to entice the girls over to them.  So far Fiddle, the youngest one, has the most musical voice.  Most of the girls are going over to him.  I don't want any of them bred before next month, so I hope the bucks stay in their pens!  The way they are bashing the panels, I don't know if the fencing will hold or not.  I swear bucks are harder on fences than bulls.  They rear up and come down hard on the fence, bending the panels with every hit.  Dang beasts.  I have 7 bucks now!  That's three too many.  The two little guys are for sale, will somebody please buy them?  They will be a nice addition to anyone's herd.  Both have nice cashmere coming in, and both are friendly.  One more than the other, but he's coming around now.  $175 each.   Red and Moonshine are their names. 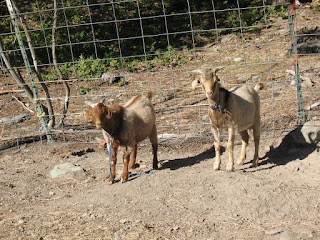 Well, that's it for now.  We are having some exceptional fall weather, too warm for this time of year, actually.  We need some rain!!  We have quite a few slash piles to burn this fall, and it's way too dry to do that now.
Posted by Ann Keenan at 9:18 PM 2 comments:

We got a little rain!

We got a little bit of rain yesterday, enough to settle the dust anyway.  It would be nice to get a lot more pretty soon.
Now that John is back home, we are getting a lot done around here!  We've had some good helpxers this year (as always) and now that he is here, too, I have more time to do my cashmere business.  At least I will in the next couple of weeks. 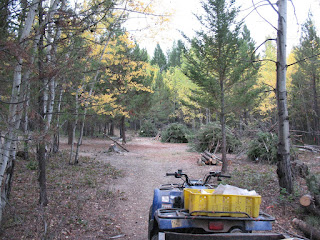 This is the lower "triangle pasture" now.  We did a drastic thinning of it to prevent a forest fire from wiping us entirely out.  Once it rains a bit more, we will burn all these, and more, slash piles and get it all cleaned up for next year.  There are 17 piles in this section, and at least twice as many, if not more, in the bigger section behind the goat pens that we are working on now.  Thank heavens for helpxers!!  They have really been a big help in doing this project, and also the firewood.  For the first time ever, we will be a good two years ahead on our firewood supply, instead of always scrambling just to get enough to get us through the currant year.

The goats are loving this, they get to eat all the tree branches without having to do much to get them.  Just go to a pile and munch out.  The aspen leaves are falling now, too, and the goats are inhaling those as well.  This is my favorite time of the year.  The bugs are mostly gone, it's cool out, the colors are pretty, and the days are getting shorter.  Back in the days when I had horses, this was my favorite time of year to go riding, too.

The new chickens are laying eggs already, and they aren't even 6 months old yet!  Out of 14 hens, I'm getting 7 eggs a day now.  They are so small compared to the older chickens' jumbo eggs.  They will get bigger over time.  Occasionally I find a "double yolker".

Dani, my old heeler cross dog, is still hanging in there.  I was sure she was dying a week and a half ago, but after fasting for an entire week, all she did was drink water, she's now back to eating a little and moving around again.  It's amazing how animals can pretty much heal themselves if given a chance.  I didn't force feed her or anything,  I just let her do her thing.  She didn't eat a single thing for a whole week, only drinking a little water, she's looking a bit spry and is eating a little.  We'll see how long this lasts.

The article about me in the October issue of Montana Woman Magazine is pretty good!  I like the way the writer, Andrea Blair, made sense of my rambling answers and wrote a great piece on my lifestyle and adventures up here.

Well, that's all the news around here for now.....