I got to go on a lion chase Saturday morning!  A neighbor came driving up and asked if he could park at our place since his hounds had a lion treed just up behind us.  I said sure, and asked if I could go along.  He said yes, so I grabbed my camera and off we went.  This is the closest I've ever been to a live lion, it was pretty neat!  His two hounds were baying up at the lion the whole time, a deafening noise for sure!   We took some pictures, then he grabbed his hounds and we left and headed back home.  I had a little chat with the lion and told him he had better stay away from our place and the goats and other animals.  Hopefully he listened! :-)
I have heard a couple of deer get killed in the middle of the night up in that area, which isn't too far away, so I know there have been lions around all winter.  I've seen tracks, too.  The chaser said this is a new one he hasn't seen before up here, so now that makes at least four different lions in this area.  As long as they leave me and mine alone, I'll leave them alone.  They can eat the deer, which there are plenty of, and leave my goats, mini horses, and chickens alone.
Nellie, our Great Pyrenees, is doing a great job of keeping all the predators away.  We have just about every predator known to man up here, so she's a busy dog.  I think part of the reason we haven't lost any animals to them is because they don't know they are edible.  They were raised on deer, so that is what they know to eat.  That's okay, I hope they never learn otherwise!
We got another couple of inches of snow today.  I don't think we are going to see the bare ground for at least a month, minimum.  When I was going up the mountain yesterday to see the lion, I fell through the crust a couple of times and it was over my knee!  I almost couldn't get my leg back up on top of the snow.  So it will be a while before it all melts.
Well, that was my excitement for the week-end.  I've been wanting to go on a lion chase for years, and now I finally have, it was pretty cool!  The lion wasn't anxious or anything, he was just laying up there watching us move around below him.  Wasn't even breathing hard.  Just waiting for us to leave so he could go take a nap. :-)  I got some good pictures, so that was great.  Glad I remembered to grab my camera!
Posted by Ann Keenan at 9:31 PM 1 comment: 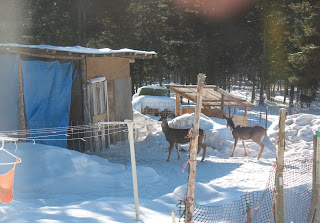 The deer are getting hungry and brave this winter.  This picture was taken in early February.  There is a big round bale of hay in there that they are eyeing.  They ended up running away and not getting any, which is good, since I can't afford to feed them and the goats.  Although they do go into the pens and eat what the goats and horses don't clean up.
We have more snow than this now.  Today was a beautiful sunny day in the high 40's, so that melted some of the over two feet of snow we have.
I've been busy working with the dehairing.  It's going pretty good.  There sure is some nice cashmere out there in this Country!   I am really enjoying this job!  Now that the sun is shining more, I can work a little longer and don't have to run the generator at all.  I can run the machine all afternoon on a sunny day, and the batteries stay fully charged.  This is good!  It was warm enough yesterday that I could actually turn off the heater in the dehairing room.  That was a first!
The snow is starting to melt, so the goats are in a mud bog again.  I am really going to re-configure all the goat pens this summer.  I'm also hiring a guy with a skid-steer and other equipment to thoroughly clean out the pens and make a really good drainage ditch so the sheltered area actually stays dry in wet weather.
I've finally got started combing the goats.  For an older doe, Latte' sure has good fleece!  Zindy Lou who is two does, too.  I am trying to do at least two a day, plus the dehairing.  Thank heavens they don't all start shedding at once!
Kidding will start next week!  Maggie is due on the 24th.  I only have three does pregnant this year.  The fewest kids born in years!  I wanted to see how the dehairing was going to be before I get lots of kids to play with and take up more of my time.  Astrid and Arianna are due in April.  Astrid got her head stuck in the fence in early February and got bashed pretty hard right in the side where the babies are by more than one goat.  Goats are mean to each other!   I was sure they died, but it seems that one is still alive.  I noticed the other day that Astrid is starting to get milk in her udder, and the pendulum is swinging again.  About three days after she got bashed, the pendulum wasn't swinging at all when I held it over her back, but last week it started up again.  So, I'm not sure what is going to happen!  It's never been wrong before, so we shall see.  I use a metal "S" hook tied to a string.  I learned about this years ago.  You hold it over the doe's back and if she's pregnant it will start swinging in a circle or back and forth, depending on the sex of the kid (or Kids) in there.  I don't know which is which, I haven't wrote it down when I check yet.  One of these days....
Well, that's about it for now.  I'll try to update this a bit more often.  Happy Spring, it's got to be coming one of these days!