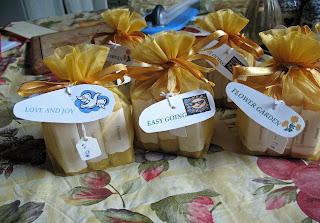 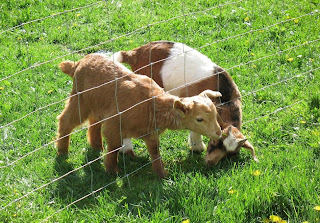 Here are Wilbur and Toby reaching through the fence to get the better grass, since we all know the grass is always greener on the other side. Longer, anyway, in this case. These two are cute, they each have one ear that sticks straight out and one that flops down. I'm rather glad they are boys, since neither one is breeding quality. They probably will have nice cashmere, so I'll keep them as wethers and then sell them next year for fiber animals to a spinner somewhere.
I pulled a muscle in my back last week, so that has really slowed me down as far as shoveling out the goat pens and re-doing the garden beds. Luckily we have been getting rain, so I can't work outside much, anyway.
I've been spinning and crocheting. I dyed a cashmere/silk blend skein of yarn jade green, and now I'm crocheting a lacy scarf with it. It is going to be really pretty! I'm still working on my neice's afghan, too.
I made a new soap packaging product. Gift bags with three 3-oz soaps of different scents. Hope they go over well.
I didn't get to do the farmers' market today. It was raining. So, I'll try it out next week, if the weather is cooperative.
I've ridden my bike three times now. I have 20 miles on it, so far. The last ride was 9 miles on the bike path. That is a really nice path! Very easy to ride on. One of these days I'll start in Kila and go all the way to town and back. I'm building up to it slowly.
We've been getting a lot of rain the last two days. There is almost 2 inches of water in the rain gauge now! It can quit any time. June will be a rainy month, too. More so than this one, I think. The grass will grow good, anyway. Should be a good hay year, if it doesn't rain after the 4th of July for a couple of weeks so the farmers can get it cut and baled.
Thursday we had lunch with one of my nephews. He's the same kid, only grown up. He's doing well for himself, and he is about to become a dad. His wife is due in September. It was really good to see him. I hope I can see all of my neices and nephews in the next couple of years.
Well, that's about it for now.....
Posted by Ann Keenan at 7:30 PM No comments:

Another week has gone by

Another batch of turkeys has hatched out. There are three in this set. Now there is another hen on a nest with at least six eggs under her. So we shall see how many hatch out of that bunch. Hopefully we will get enough that live till this fall so we can provide our regular customers with turkeys for Thanksgiving.
I started letting the goats out into the yard so they get used to eating grass again. They make the best weed-whackers along the fence lines. I won't have to use the gas powered weed-whacker at all this year, at least not where the goats can get to.
I've started re-doing the garden beds again. We are going back to the Square Foot Gardening method. It will be the easiest and grow the most amount of food in the smallest space. We will have enough produce to fill the freezer this fall, if the weather cooperates.
I have a new bicycle now. I took it out for a spin today for the first time. Rode a whole 4 miles! ☺ I never realized how much of a slope the county road has, just driving in the vehicles. It's all either down or uphill! I haven't ridden a bicycle for about 14 years, so this was an almost new experience. There is something to be said about the freedom of riding. The different smells you smell, and the sights that you miss when in a vehicle, are all there on a bike. The thrill of picking up speed going down hill and flying along with the wind in your face. The drudge of pedaling up the hill, looking forward to the next downhill. It's all good. ☺
I do think horseback riding is better, though. Then you can look around at the sights more, without running into anything. You just can't go as far, or as fast on a horse as opposed to a bike. They both have their merits.
The kids are all growing well. I so enjoy watching them interacting with each other. They are so cute!
I made my first felted purse the other day. It's out of handspun yarn, crocheted, then run through the washing machine. I went to JoAnn's today to find just the right button to close it with. I ended up buying some commercial yarn to make an afghan for a niece and her new husband. They will get it for their first anniversary, instead of a wedding present. That's close enough. ☺ Hopefully they will like it.
My tulips are putting on quite a show this year. There are well over 100 blooms! It's so pretty. The peonies are almost ready to bloom. Another couple of weeks and they will be blooming. I just need to weed the flower beds now. Everything, actually. ☺
We are eating fresh asparagus now. It is so good! Yum..... We are also eating salads earlier than ever before, since John planted salad greens in the greenhouse. I have an idea by the time the lettuce in the regular garden is ready, we will be tired of eating salads! But, we will have one at least every other night. One of these years I need to get things coordinated so the carrots, radishes, spinach and lettuce are all ready at the same time so we can have really good salads!
John is making good progress on his workshop. He took time off on Sunday and rode around Lake Koocanusa with another guy. They had a good ride. The weather was pretty good. John even brought me home some flowers he picked along the way! He hasn't done that in years. That was a nice surprise.
Well, that's about it for now. More as it happens....
Posted by Ann Keenan at 8:04 PM No comments: 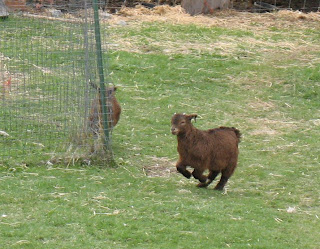 Here's Bruiser and his sister, Mocha, playing in the yard.
The bear I saw today was this same color! It was about a mile and a half down the road from our place. I was coming home from town, came around a corner, and there it was, sitting on the side of the road, eating grass. It looked up at me, then turned around and ran up the road a ways, then ducked into the woods. That was pretty neat seeing that! It's been a couple of years since I saw one. The diesel truck is so loud, it's rare that I get to see any wildlife, except deer, when I'm in that thing.
If you look really carefully at this picture, you can see the baby turkeys. There are four in this picture, but there are only two left now. The other two have disappeared. I think the raven that has been grabbing the eggs, grabbed the babies, too. I hope these two survive! There is another hen sitting on a nest on the hill, so I hope those hatch out pretty soon. She's on at least 6 eggs. 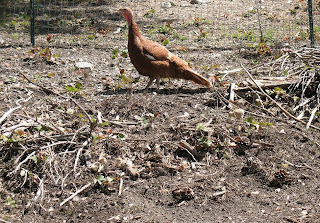 Hopefully at least four of them will hatch. We shall see pretty soon, I guess.
I am making progress on the pen cleaning. I didn't get any shoveled out today, but I got two loads yesterday. There are probably close to 100 loads to remove from the main pen. It will be good when that project is done! No more letting it go for two years...
Well, that's all that is happening around here. I'll write again when something interesting happens....
Posted by Ann Keenan at 8:55 PM No comments:

Here are Bruiser and Mocha, Ariel's kids from this year. They are a really pretty rich red/brown. There are a couple of others this color, or variations of this color, this year. 14 cashmere kids all together, and 4 dairy kids. They are all so entertaining to watch playing with each other! Much better than TV in my opinion.
That's Heather, a yearling, in the background. She will be bred this fall. She was the one that last year when she was a baby, she would jump into my arms. Till she got too big, anyway.
Nobody seems to want to do that this year. Only every other year do I get a kid that will jump up into my arms. Oh well...
Today is a nice sunny day. I did the Farmers' Market again today. There were a lot of vendors, way more than last week. Lots more people wandering through, too. I did okay. Sold quite a few soaps. I had my spinning wheel there, which always draws people in. They like to watch me spinning, and showing their kids how yarn is made, the old fashioned way.
Well, time to go do the evening feeding routine....
Posted by Ann Keenan at 4:44 PM No comments:

New blog with the goats 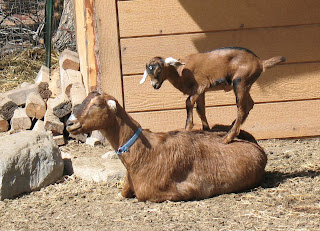 Well, I'll try this blogger and see what happens. I like the ease of adding pictures! They are better than the last one I tried.

Here is one of the dairy does with her doeling Brownie on her back. I finally have a pure dairy girl to add to the herd. For the last few years, they have all come out boys. So this one was a nice surprise! I think she will be a good milk goat next year. We shall see.

Posted by Ann Keenan at 4:19 PM No comments: