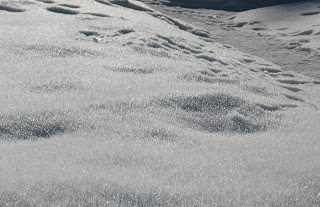 We had a freezing fog one morning last week which created ice crystals on top of the snow.  It made the snow look like it had a layer of fur on it.  Pretty!  I took a walk around the upper pasture and saw all kinds of critter tracks, rabbit, grouse, mouse, and of course, deer.  No mountain lion or other predator tracks were seen, thank heavens!


This yarn I spun for one of the CSA shares.  It's hanging to dry in this picture.  Now it's in it's new home waiting to be knitted up into something wonderfully soft. 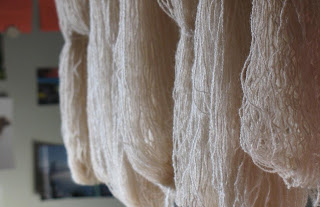 The does are all bred now for next Spring.  There will be lots of babies bouncing around here come March and April, even into May.  There were a couple of does that didn't take on the first try in with the buck, so they are now bred for May kids.  The week of the 24th of March will be when the majority will pop out.  A busy week that will be!  Hope the weather is nice then.
We are having a fairly mild winter now.  After that first blast of 16 inches, it's only snowed about 5 inches more since then.  Yesterday it was 45 degrees and sunny!  That melted a bunch more snow.  We are down to about 5 inches in most places now.  I am rather enjoying the lack of snow.  A half inch here and there to freshen things up, and I'll be happy. :-)
The goats are all in full fleece now.  I love going out and petting them this time of year.  They are so soft.  Little Oksana is still squeezing through the cattle panel squares and getting into everything.  I think she's ready for another growth spurt, then she won't be able to get out.  She can barely get out now, it's a pretty tight fit!  Her brother Socks quit a long time ago.  He got stuck one day, luckily I was here!, and decided that it wasn't worth it to try that any more.
I don't know how other goat raisers can keep their bucks together and not have catastrophies.  I had Hercules and Midnight in together, they grew up together so you'd think they would be okay, but once breeding season started they were fighting all the time!  Both of them ended up in pretty rough shape, so they are in seperate areas for the rest of their lives.   Every time I've tried to keep any bucks together, they end up almost killing each other.  So from now on, each buck gets to have his own space.
I pulled each one out and took them to a different pen out of sight of each other for breeding the does, but once they were back together again, the fighting started up again.  Never again will any two bucks be together past the age of one year.
I'm going to have to get a new buck that is completely unrelated to anything I have here for next year.  I need "new blood" around here.  I'll cross that bridge when I get to it late next summer.  Maybe a road trip is in the works!  That would be fun.
Well, I hope everyone has a wonderful, spectacular, Holiday Season!!  May 2012 be a year filled with Peace, Joy, Happiness, Abundance and LOVE for everyone!
Posted by Ann Keenan at 5:52 PM 2 comments:

Today was a beautiful, wonderful day!  The sun was shining, there was a little inch of new snow to freshen everything up.  It was great!  I took my interns, Colin and Heidi, up to the Rocks so they could see the spectacular view from there.  It's about a 45 minute hike up, and 35 back down.  That is, if you follow the trail as it used to be.  Sometime in the last year or so, a microburst went through there and knocked down a whole bunch of trees, so now detours are the norm.  I'm going to have to re-flag the trail so we can find it easier again.  We did some bushwhacking today. ☺  There sure is a lot of good firewood up there now, with no good way to get to it!  Bummer!!
Surprisingly enough, the only tracks we saw were from rabbits, squirrels, and deer.  No mountain lions, coyotes, or any other predator.  There was an old track up near the top of either a lion or wolf.  There was new snow in it, so it wasn't really clear anymore.  I thought I saw toenail prints, so that would be a wolf.  It was a big print, that's for sure!  Bigger than any dog around here. 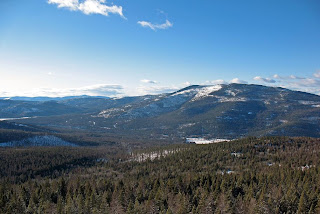 Here is the view to the west from the Rocks.  Our place is tucked into the hillside below here so you can't see it from up here.

I do believe I am one of the luckiest people on the planet to be living here where I do.  There are a few inconvieniences to living here, but on days like today, they are nothing, and it is well worth it to be able to be here!  The goats love it, wandering through the woods eating all kinds of good food all summer long.  I love it, following them around through the woods, watching them enjoying their goat lives.  Winters get interesting around here sometimes, but it's beautiful. ( after we are all dug out and everyone is adjusted to the snow).
LIFE IS GOOD!
Posted by Ann Keenan at 6:44 PM No comments:

Well, the snow did melt quite a bit.  We still have about 6 inches or so, but that's way down from the almost two feet we started out with!  Now our road is pretty much solid ice.  Glad I don't have to drive it every day.  I will have to go get a big round bale of hay this week-end, so the chains will have to be put on the truck.
Today was a nice sunny day.  I've started the trimming of the goat hooves for their winter pedicure.  The wether pen is done, and today I did a couple of the does in the main pen.  I'll have everybody done by Sunday.  Lots of little feet out there!  188 hooves all together.  I've almost wore out the orange hoof trimmers I got 10 1/2 years ago when I first got my goats.  They've held up well through all the trimmings.
It's hard to believe this year is almost over with already.  It's been an eventful year, that's for sure!   Lots of interesting events here on the farm.  Getting my interns has been the highlight, I think.  It has been so extremely wonderful having help with all the projects needing done around here.  The goat pens are the cleanest they've been in two years, and they all have enough shelter now, more than enough, actually.  There's room for expansion! :-)  With 19, soon to be 20, does pregnant, there will be plenty of new kids that will need housing next year.  The last week in March, especially around the 25th, is going to be a busy one!  Kids will be popping out left and right.  Hope the weather is good that week.
I'm almost done with dehairing outside cashmere for this year.  Then I can get to mine, which I should have all dehaired by Christmas!  At long last.  I have two years worth of my own cashmere to dehair now,  then I'm shutting down the machine till Spring.  Next year I'm doing mine first, then I'll do other people's.  Somehow I let myself get talked into doing everyone else's cashmere before doing my own, when the whole reason I got this machine in the first place was to do mine.  But, not anymore, mine comes first. ☺  I'll be happy to do others' after I'm done with mine.  It's been a good learning experience.  I've seen a good cross-section of the cashmere on this Continent, and mine is as good as anyone else's, and it dehairs easier than most, so I've got some good goats to work with!  I'm a happy person.
Now that the Holidays are upon us, I hope everyone has a wonderful month!

Posted by Ann Keenan at 8:53 PM No comments: