Summer is finally here! It is warm and sunny, the mud is drying up and the mosquitoes are thicker than ever before. The grass is growing now, and the goats are happy campers.

The garden is starting to grow. I'm almost done making the new beds in there. The flowers are all doing really well this year. All that rain did wonders for them. This place is starting to look pretty good now.

Yesterday when I was using the grass clippers to trim the grass in the iris bed, I managed to cut a chunk out of the tip of one of my fingers. Ouch! It took quite a while before the blood quit flowing. I had to lay on the couch with my arm sticking straight up in the air for a while before it finally quit. Now I have a cumbersome bandage around the end of my finger. Hope it heals quickly. It's hard to type without using that finger. ☺ Or do anything else, for that matter.

The goats are in the upper pasture for two weeks now. I'm doing a two week rotation. There is lots for them to eat up there right now.

Last evening we heard a mountain lion growling over in the neighbor's place. The goats were up on the hill behind the house when that happened. They ran into their pens pretty quickly. I went out and walked the fenceline over that way, making lots of noise and trying to scare it away. I was successful, at least for the time being. The deer are back, so that means the lion has left.

I'm waiting for the last doe to have her kid. The only accidental pregnancy this year. She's due on the 1st, so it could come any day now. Hope it comes out easily, the hand that would help is the one that is hurt, so I can't be reaching in to pull anything out!

Well, that's pretty much all that is noteworthy around here for now. More as it happens....
Posted by Ann Keenan at 4:59 PM No comments:

Singing in the Rain 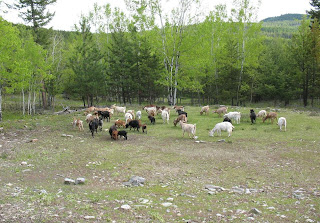 Here are the Cashmere goats eating in what used to be my round pen for working horses in. I took down the fence and it's now just one of a very few flat spots we have on the place.
As you can see, there isn't much grass in there yet. The deer keep eating it down. Now that we've had all the rain and things are finally growing, maybe the deer will move out into the woods where there is lots of taller grass.
We have been getting a lot of rain lately! Today we got a whole inch, and it's still coming down lightly. I let the goats out for a while, but they didn't go far. They kept watching for me to come out and feed them their grain.
I'm out of hay now, so I'm going to have to go get a load on Friday. I made it longer than ever before this year. Usually I run out in March or April. It's almost time to start cutting this years' hay, so I should only have to buy about 2 tons to get me through until this years' crop is ready.
I got the asparagus/strawberry bed all weeded yesterday. That took a few hours. It looks so much better now. We are going to have a lot of strawberries! We're getting quite a bit of asparagus, too. Yum!
I dehaired another ounce of the taupe cashmere cloud today. When I get it back from the mill, it still has a few guard hairs in it, so I go through with a pair of tweezers and pick all the hairs out. It takes about an hour per ounce to do that. Then when I sell it, or spin it myself, there aren't any guard hairs to keep stopping and picking out as I go. I still miss an occasional hair, but that's it. Much better product that way.
I'll be taking in this year's harvest pretty soon to be dehaired. Then I'll have lots of cashmere cloud to work with and sell. I love spinning cashmere and crocheting with it. It is so soft! :-)
Well, that's it for now. More as it happens......
Posted by Ann Keenan at 8:35 PM No comments: 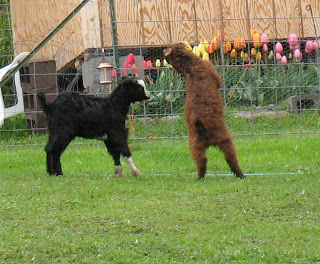 Fancy and Carmel are having fun playing. They are so fun to watch! Dottie is all better and back to her normal cantankerous self. ☺ I let them out into the pasture for an hour today, and all are fine. The cashmeres got to come into the yard again. They are great lawn mowers. Especially around the fence lines.
I got another garden bed done today. Also crocheted on the hat I'm custom making for someone. Hope they like it! It was laundry day today, too. The sun was shining for the most part, and it was half-way warm with a breeze. A good day to hang the clothes out on the line to dry!
I strung up thin baling twine in the turkey pen to keep the ravens and hawks out. It seems to be working. I watched a raven today flying up there and checking everything out. It did not go under the twine. So I think future hatching of baby turkeys will have a much better chance at survival. There are still two hens sitting, so I hope there will be at least 10 babies that make it to adulthood.
I have some irises about to bloom. The peonies are getting close, too. The tulips are starting to fade away slowly. They are still putting on quite a show, though. The daffodils are still blooming, too. We are having a late spring this year. We should have a late fall, too.
Well, that's it for now.....
Posted by Ann Keenan at 8:34 PM No comments:

Today was a rough day. When I went out to milk the goats this morning, Dottie wasn't at her usual post waiting at the gate. She was laying down inside one of the stalls, not feeling well at all. I think she had grass tetany. I left them out too long in the pasture yesterday, and she ate too much. Although the others, and even the horse, are all fine. Dottie is older, though and has been having a harder time after her kids were born this year. Anyway, I thought she was going to die on me.
I offered her all sorts of herbs, vitamins, etc, which she refused all of. Then I got out the big syringe, put about 20cc of propelyne glycol in and gave her a dose of that, orally, at 4 pm. She didn't seem to get any better right away, so I decided I'd better put her down. I sat and cried and told her what a good girl she's been over the years, and generally said goodbye. I was going to have John put her down when he got home. So I said my goodbyes, then went and did all the evening chores. Then I went back over to the dairy side to feed the rest of them, and Dottie was feeling better! So at 6pm I gave her another 20cc of the p.g. and decided to see what happened. I stuck my head out the door at 8 and she was looking up at me with her ears up again. Before they were sticking straight out and droopy. So the p.g. worked and I think she will be okay after all. I'm going to have to start watching her more carefully now that she is getting old and not as robust as she used to be. Her two boys are old enough to start weaning, which I'm doing on Wednesday. She's going to be even more pampered than she has been. I'm sure she will become even more demanding when I do that. :-)
On Saturday, I'm setting up my booth at the Kila Community Coalition's annual "rummage and collectibles" sale. The sale is benefitting the new park that is in the works to go along the new bike path through Kila. It should be pretty nice when it's all done. A good place to take the family and have a picnic, etc. You can ride your bikes there, have a picnic lunch, and ride back home. The sale is from 8am to 4pm at the Kila community church. Easy to get to, it's right on the main road just off the highway as you turn into Kila. So, come check it out. There will be things both inside and outside, so the weather won't matter too much. Should be a fun time!
I still don't have the garden beds done. Tomorrow I'm spending most of the day digging them up and getting them all rebuilt. It's going to look pretty nice when it's all done.
The tulips are still blooming profusely. They look so pretty. So do the daffodils. My little "porch" garden is starting to come up. The lettuce, radishes, spinach and swiss chard are all starting to emerge. The potatoes I planted out in the forest garden are starting to grow finally. The soil is just not very warm yet. It's been raining and cold for a long time now. Hopefully by mid-month things will start to warm up a bit and the garden can be planted and everything will grow well. We will probably have a late fall since the spring is slow. We will still get a good harvest.
Today I took thin baling twine and strung it up above the turkey pen in a grid to keep the predatory birds away from the babies. I'm down to two surviving baby turkeys now. Hope the other two hens hatch out more! There are two sitting on nests now. I think the grid will work because the birds won't be able to fly in and snatch, then take off again. Their wings will get caught in the string. They have pretty big wing-spans, so they won't feel comfortable in coming in under the grid. They wouldn't be able to get back out easily. I only did it over half the pen, though. The half with the bushes and nests in it. The mama birds are hopefully smart enough to figure out that they are safe on that side. The babies have learned quickly to hide when someone sounds the alarm! One I don't ever see out till it's chore time, then it ventures out with the other one. It hides most of the day.
Well, that's all the news for now. More as it happens.....
Posted by Ann Keenan at 9:01 PM No comments: