Another Chapter in the Book 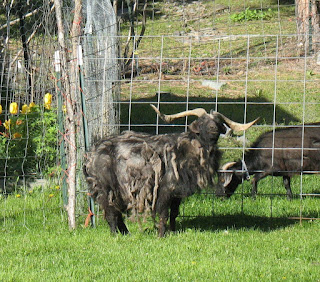 Yesterday was a rather sad day around here.  At 1:30 am Angus died.  Nellie started barking quite fiercely over towards Angus' pen, so I went out there in my pjs and bathrobe with the flashlight and here was Angus upside down with his horn stuck in the ground.  He was making little grunt/groaning noises.  I ran over and got him upright, but it was too late, he died a couple minutes later.  He lived to be 16 years and three months old!  That's pretty old for a cashmere buck.  This picture was taken last year before I combed him out and got him all pretty looking, or I should say handsome looking.  For as old as he was, he still had some really nice fleece.  Lots of crimp, it was still very tight.  The microns were way over the limit to be cashmere I think, it didn't feel very soft anymore, but it sure had style!   I saved his horns, then we hauled him away.  The last of my original goats.  I have quite a few of his daughters, so the line will continue.

Another big change is the dehairing machine is leaving any day now.  I have it all cleaned up and ready to go.  I have quit deluding myself into thinking that this was actually working.  The machine is just too big, takes too much electricity, and is too expensive to justify keeping it for personal use.  I don't want to do other people's cashmere, it's too slow of a process, and I have other things I want to be doing.  While I did like to dehair my own fleeces, they came out so much better, this machine is just too big, it needs to be in a mill, which is what it is designed for in the first place.  Now that I decided to let it go, I am so relieved!  Now I will have time to really take good care of my goats again, and take them out into the woods to eat the neighbor's places down for fire control and all of that good stuff.

I also got a sizable grant to get out of debt with!  Now that the machine is going away, I am out of debt and back in the black instead of deeply in a financial hole I didn't see a way out of!  That is such a relief, my mind is working much clearer and I can think properly again.  Which is why the machine is leaving, I admitted it wasn't working the way I envisioned it would be when it first came.
Now I'll be sending my cashmere out to mills to be dehaired like I used to before the machine came along.  I'll just be picking out the remaining guard hairs with tweezers before I sell or use the fleeces.  I'll still know what goats the cashmere comes off of, if the mills run it through like I will be asking for, they will just be in combinations instead of individual.  So, it will still be basically the same good stuff my customers are used to.  I probably won't have it back as early in the year as when I was doing my own, but since it took me a long time to get mine done anyway, it might not be all that different.  We'll see.   A little course correction on the path of life.  It's all good!
Posted by Ann Keenan at 1:43 PM 3 comments: