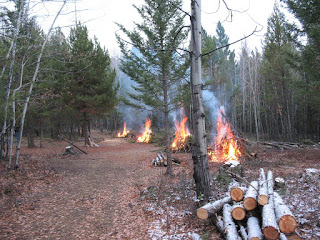 We got the lower triangle pasture all done.  Now all we have to do it cut up all the poles into firewood and stack it out there to dry for a couple of years and we will be set.  Now we just have the area behind the goat pens to do. 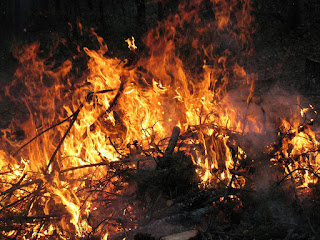 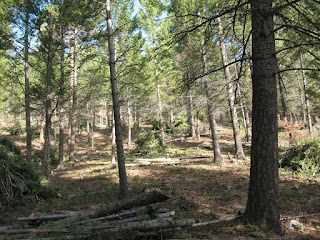 Monday will be a day of burning, the weather sounds like a perfect day for it.  Then we have a winter storm watch out for Tuesday for snow and blowing snow.  We won't be able to get all the piles done tomorrow, there are too many, but a lot of them will get done.  We will cover the remaining ones with tarps so they don't get covered in snow, then burn those after the storm.
Yesterday Rocky got his nuts cut off, so he's in the house recovering.  Tomorrow he gets to go back outside.  For never being in the house before, he's behaving quite nicely.  He weighs 102 pounds!  Not a small dog.  He barely fits in here.  One thing about his size, it got him right in and out at the clinic.  They didn't have a cage big enough for him to fit in, so they operated right away.  He wasn't quite awake yet when I got back there to pick him up, so a couple of the guys carried him out to the truck on a blanket and he rode home mostly zonked out.  He was still pretty groggy when we got home, but he could walk okay, so we slowly made it up and into the house, where he laid down and slowly woke up entirely.  Today he's pretty much back to normal.     Tomorrow he will spend most of the day outside and in the porch where it's cooler, then back outside he goes.  He's missing his goats and is getting pretty antsy in here.  I'll put him in the isolation pen which is beside the main pen so he can be next to his goats and see what's happening without being able to play just yet.  He's supposed to stay quiet for 7 days.  I think he will heal up faster than that.  Cloud healed up faster, and hers was a major surgery, his was pretty much external.
I have opened up a new on-line store on the Montana Marketplace website.  It showcases Montana artists and craftsmen.  The website is/https://www.montanasmarketplace.com/store/pine-needle-farm-cashmeres/  That will get you to my store.  I'm adding things to it slowly but surely, as I get them made.  I am almost looking forward to snow on the ground, I'll be able to devote my time to fibery things instead of getting things done outside.  It sounds like tomorrow is the last day before the ground turns white anyway.
We had a serious wind storm on Tuesday and Tuesday night.  Luckily nothing got damaged, or blew away.  A couple of the roofs on goat houses blew off, but those were easily fixed.  No trees of any size came down, and everything survived just fine.  Solar poser is a good thing!  There were a lot of power outages in the area, but we were well lit. :-)
Happy Thanksgiving to everyone!
Posted by Ann Keenan at 7:36 PM 2 comments:

Winter has arrived.  The ground is covered in 3 to 4 inches of snow and it didn't melt today, even though the sun was shining.  It was a pretty day, actually.

The forest thinning is almost done, all that is left is the burning of the slash piles.  The lower triangle part is all done.  It looks so different now.  We burned 7 piles today out behind the goat pens.  The goats are going to have so much fun out there next year!  If the deer don't eat everything as fast as it comes up in the spring, that is.  One got stuck in the boy's pen fence last night.  It got out on it's own, but it bent the top of the cattle panel and left some hairs on it.

The Akbashes have figured out how to get out of the goat area now and have been running all over the whole place yesterday and today.  They got in the turkey pen last night and scattered them.  Luckily they didn't hurt or kill any of them, just moved them around.  I had to go out and herd them back to their corner so they could huddle down together again for the night.  Then today Rocky attacked Nellie and wounded her some.  Nothing major, but she got a puncture wound right above her eye and on her ear.  I put some ointment on it, and will do that for a few days till it heals up.  When I was trying to break up that fight, I had a hold of Rocky's tail and was pulling him away from Nellie, who kept coming after him!  I yelled for John to come and help me.  We got them apart finally, then Rocky started to go after John!  Luckily I still had a hold of his tail!  I grabbed him by the collar and grabbed his muzzle and clamped his mouth shut and gave him a real lecture.  He is getting his nuts cut off on the 21st.  Hopefully that will calm him down!  He's getting way too aggressive, bordering on dangerous.  At least he doesn't do anything to me, he knows I'm the supreme boss around here.  He really was going to attack John after he took the rake and pushed him away from Nellie.  That made him mad.  Glad I had a hold of his tail still or that could have been pretty bad.  Then after I had him sitting down and calming down and John came back after checking Nellie, he growled at John as he walked up.  So I made sure Rocky quit doing that.  I then put him in the new pen I built the other day with the goats, and made him stay there the rest of the day.  I fixed the spot where they were escaping from, I finally figured out where it was.  Now they are back where they are supposed to be, with the goats.   I was going to keep Rocky intact and get another female unrelated to him next year and raise them, but I've decided I don't want to have to deal with his aggression and testosterone, so he's getting neutered on the 21st.  I had already made that appointment before this happened today.  Glad I did!  He is too big to be that aggressive, especially when I have a lot of strangers around at various times of the year.  It would not do to have one of the helpxers get hurt by him.  Livestock Guardian Dogs are unlike any other breeds of dogs.  They think independently of humans, react differently than companion dogs, and are bred to guard livestock and guard them well.  Even Nellie, who didn't bond with the goats, but is my faithful companion wherever I go (unless it's in a vehicle) can turn on a dime into a scary dog.  She has bit me, although it was by accident when she was trying to kill Dani, almost killed Dani 3 times, and is a fierce protector of the place in general.  She will only come when I call her if she sees that I'm not going to do anything to her but pet or feed her.  If she thinks I have something up my sleeve and am going to do something to her, she goes the other way when I call her.  When I have the comb in my hand and call her, she really heads the other direction rapidly. ☺  She did let me doctor her today willingly.  She knew I was helping her.

All that excitement today has made me tired, so I'm actually going to bed at a decent hour tonight!  I'll probably wake up in the wee hours of the morning ready to go, but oh well.  It's funny, when I turned 50, my sleep habits changed.  I used to need a good 8 hours of sleep, but now 6 1/2 to 7 hours and I'm good to go.  I've not set my alarm clock a few times to see how long I'd sleep, and right at 7 hours I wake up ready to go.  The only time I take a power nap during the day, is if I didn't get much sleep at all the night before.

Hope everyone is ready for winter, or almost ready.  I was wanting to get a few more things done, but they aren't vitally necessary, so it's okay.  Now I have a really good excuse to stay inside and spin and felt! ☺

Posted by Ann Keenan at 8:59 PM No comments: