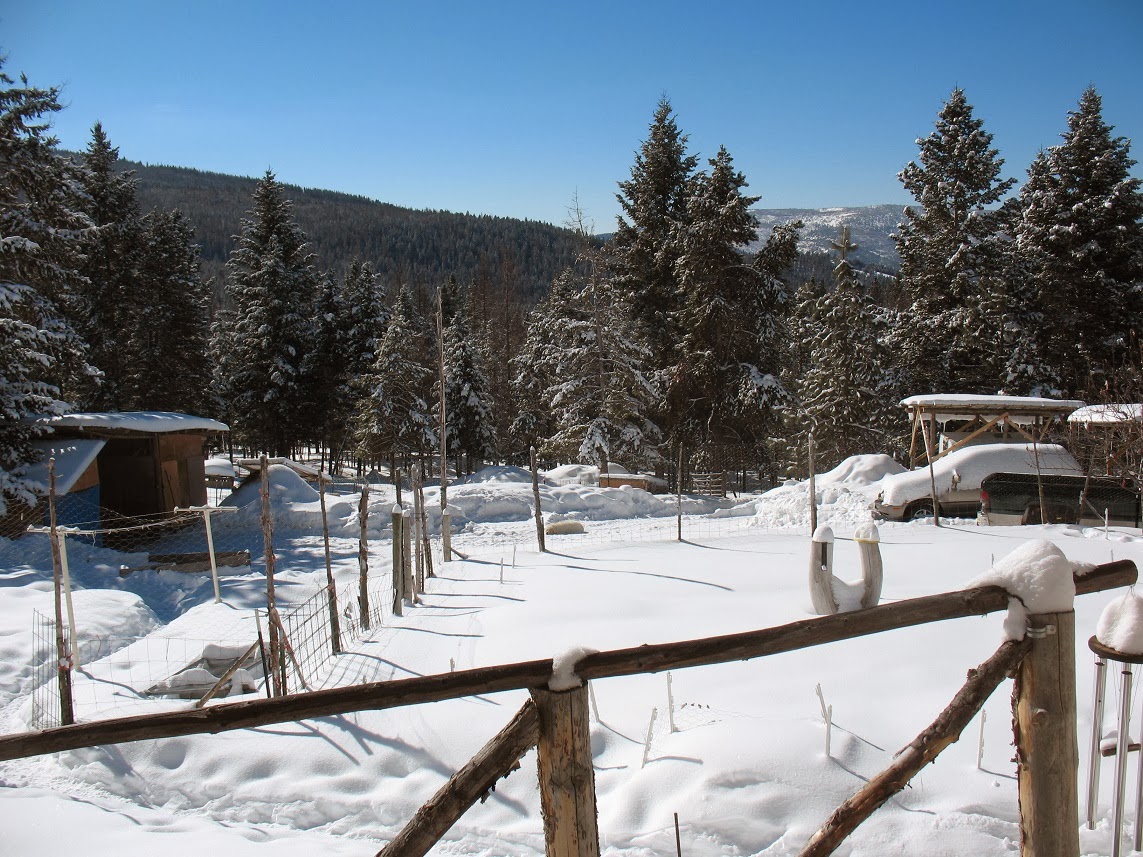 This was the weather on Wednesday.  We had a couple of beautiful sunny days. Today it's a whopping 8° and it's snowing again.  At least we aren't getting the full effect blizzard they are down in the Flathead Valley.  We just get a little breeze every once in a while.  It's supposed to get well below 0 again tonight and Saturday it's supposed to be a high of 1°.  I know, this is Montana, we do have winter here, but this one has seemed extra long, even though we always have snow on the ground this time of year.  I think it's all the extra cold temperatures we've had.  It's relatively warm for a few days, then arctic air returns yet again.  It's really slowing down the combing of the goats!  Yesterday I partially combed one doe, but left her sides and back alone and just got her chest, neck, and lower sides, where it was really starting to come off.  I have completely combed a few of them and now they are out there standing around looking pretty chilly.  By Tuesday it's supposed to be back in the 30's again.  I hope we have a rapid melt off in the next couple of weeks.  I am so ready for green grass and flowers!
I am curious as to what all is going to come up out where the big thinning project took place last summer.  I am almost done with the two acre thinning that I'm doing on my own.  It's open burning season starting tomorrow, but there is so much snow on the piles, that there's no way to burn them yet.  I have just a few trees left to cut in the dairy pasture, then that will be done.  I'm waiting for the snow to fall out of the trees now so I don't get covered in it when I cut them down.  ☺
I am having an issue with the neighbor dogs coming up here almost every day.  They either climb over the fence, or dig under it and I am really getting tired of them coming up here!  My dogs aren't getting out, and I really do not like other people's dogs coming here.  I have repeatedly told them to keep their dogs home, I don't want them up here, but they aren't doing too much to keep them home.  They claim that they can't keep them home, they dig under, jump, or climb their fences, too.  To me, that means the dogs aren't happy if they continually leave their own home and come over here.   Maybe they should get rid of a couple of them.  They have 4 dogs.  This has been going on for almost a year.  The dogs aren't chasing any of my goats or anything, so I can't legally shoot them, they are just using this place as a bathroom and getting into everything.  One of the absolute dumbest things I ever did was tell them Sam had some siblings.  They got Sam's sister, so that adds to the problem.  The two dogs want to play together.  Sam is a good boy and doesn't climb or jump fences, but his sister does.  She is getting as sneaky as their blue heeler dog, who comes up here, too.  As soon as I open the door, they take off for home again, so they know they aren't supposed to be up here.  That also means I can't catch them to take them to the pound either.  I'm going to call the animal control guy here soon.  I'm done giving them leeway to fix the problem.  They obviously aren't thinking I will really do anything, so it's time to really do something.  I've given them plenty of warnings, I've even lost my temper and yelled over the phone at them, with a few choice words, to keep their dogs home.   The other neighbors up here keep their dogs at home.  They have escaped a couple of times, but they don't continually come here.  They don't go over or through the fence, so they aren't bothering me.  I have this place completely enclosed, the driveway gate is even closed all the time, so there is absolutely no excuse for any dog coming here.  Now I've written about this publicly so there is a record of it.  It's most maddening, to say the least.
On to happier subjects...  The chickens are finally laying a good amount of eggs again!  Now I have enough to sell, or take to the food bank for them to distribute.  I'm thinking I'm going to get some turkeys to raise this year.  We used to do that for years until I got the dehairing machine and didn't have time to take care of everything around here.  I miss homegrown turkey at Thanksgiving and Christmas.  Any other time, for that matter.  Even the organic store bought turkeys aren't as good as the ones we grew.  Plus, I have customers that are really wanting me to get back into growing them again.  They miss them, too. :-)
Well, it's time to go out and do the evening chores already.  Even though I didn't do a whole lot today, the day went by pretty fast.
Spring is coming, it really is, someday, somewhere......  ☺☺
Posted by Ann Keenan at 3:30 PM No comments:

Winter on the Farm

It's turning into a long winter around here!  I'm tired of the snow and it's only February.  I shouldn't complain at all, though.  The rest of the country has had much worse weather over all than here.  This is just a pretty normal winter for here.  We just haven't had a normal winter for so long, that it doesn't seem normal anymore.
The goats are all doing well.  The pregnant ones are growing their babies in fine fashion.  Speckles is probably going to have triplets again, she is quite large, and she's not due till the end of March.  Belle never did come into heat after the first time, at least that I could see, even with a buck right next to her in the weaning pen.  So, I'll just milk her through till next fall.  I guess she likes being run through and not having to deal with kids every year.  She is 13 this year, though, so I was wanting her to get bred before she gets any older.  She has different ideas I guess.  She's healthy and everything.  She did give me two doelings last year that look like they might be good milk goats, so we'll see.  She might not ever get bred again.
Dani is all healed up from Nellie's attack on her.  It's amazing how well the herbs and oils worked on her!  She's back to her senior self now.  She's half deaf, half blind and her back legs are getting weak, but she still gets around pretty good.  Sam is her protector now.  He follows her everywhere and watches what she does with great interest.  He's a good dog/puppy.  He's only 10 months old, today, but ever since he helped me get Nellie off Dani during the attack, he's really matured.  He still has his puppy moments, but his confidence level went up tremendously.

I got a cold last week, the first one in years.  I'm being a big baby and taking it as easy as I can till I get well, which seems to be taking forever!  Since it's quite rare that I get sick, this hit me rather hard.  I'd forgotten what it's like to be sick.  Not fun, that's for sure.  But, I'm almost completely well again now, so onwards I go. :-)
I'm slowly getting the goats combed, one by one.  The weather isn't cooperating very well.  I can't comb wet goats, and I don't have a good place to keep them really dry in.  Today I got the alleyway between pens situated so I can put family groups in there to keep them dry till I comb them.  In the morning I will put Celeste and her two kids from 2012 in there and then after they are done eating, I will comb them. Then the next day I'll put another family in there and get through them that way.

Well, that's all the news from here for now.  Winter is pretty slow, for the most part, around here.  Oh, a mountian lion walked right by the neighbor's house a few days ago, and wandered around between places. I was wondering why my dogs were barking so much that night, now I know.  I'm so glad I have the dogs to keep things away!!  Nellie and Sam are working well together, it's kind of neat to watch.