Okay, so where did the time go?  All the kids are born now.  22 total.  There would have been 25, but I lost three of the bucklings, one at two days old, one at two weeks old, and the third at one week old.  Two I don't know why, and the third I did a necropsy on and he had a twisted large intestine.  I have no idea how he got that.  The other two were just laying there dead, not a hair out of place.  Sad, but at least they were all boys and not any of the girls.

Penelope had triplets!  These are her first kids, too.  She is a good mom and they are the cutest little things out there.  Penelope is half dairy and half cashmere.  She's the last kid Dottie, my first ever goat, had.  The kids are 3/4 cashmere.  They were born June first, I wasn't even here, I got home and here were three kids up and wobbling around, all healthy and mom doing fine.  I got home less than an hour after they were all born. 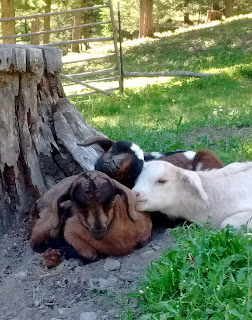 June is the one on the left, Uno is the cream one, and Pearl is the one in the back.  This was taken after they wore themselves out playing on that stump and two boulders just off camera.
Celeste had her kid on Monday of this week (the 13th).  I missed that one, too!  I rented out 16 goats to a farm to eat down their weeds and grass on Sunday, and I was so concerned with going and checking on them, that I didn't really pay attention to Celeste that morning.  I wasn't expecting her to kid till yesterday, so when I got back home and there was a kid, I was surprised.  Celeste is 10 years old this year, so she's an experienced mom.  Everything was fine, and the little girl I named Celine. 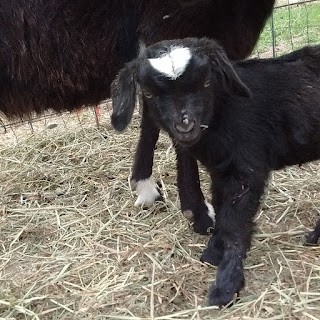 I have a lot of goats for sale this year.  I want to get down to 10 does, and 10 wethers, plus the 3 bucks, and sell all the rest, including the two mature bucks that are related to everyone in some way.   I have 20 sold now, but I still have the bucks, one white and one black, and a couple of does with this year's kids on them.  I really like the kids the two bucks are throwing, but it's time they found a new batch of does that aren't related in any way to them.  They are 4 and 7 years old, lots of life left in them, they've had it pretty easy here.   I really don't want to take any to the auction, I don't like doing that.
Next weekend I get to go to the Montana Association of Weavers and Spinners conference down on Flathead Lake.  The guild I'm in is hosting it this year, so I get a weekend away from here playing with like minded fibery folk! :-)  I'm also a vendor there, with my needle felted critters and some handspun cashmere yarn.  I am looking forward to it!  Hope the weather is half way warm, and not too much rain.
Well, back to needle felting, I want to get a few more critters made before next week!
Posted by Ann Keenan at 2:15 PM 1 comment: