Monday was not a good day around here.  Fern, one of the dairy doelings jumped the fence into the adult does pen, must have got her leg hung up in the fence, but got it loose.  I went out to feed and here she was with a completely broken right back leg.  Everything was shattered, it was just hanging by the skin.  So, I did her in and spent a couple of hours processing her into the freezer.  Since she was only 10 months old, there wasn't a whole lot of meat on her, but there is about 10 lbs.  That was sad!  I was looking forward to her as a milk goat next year.  She was a nice size, had nice long teats, and was looking like she would be a very good milker.  Why couldn't it have been her brother, who is destined for the freezer anyway?  Dang.  Life on the farm I guess.

The snow has melted a bit.  Last Sunday the neighbors and I went out with our ATVs and snowblower and made some turnouts on the upper part, the last mile in here.  It's always the deepest snow, and the narrowest part of the whole road.  Now it's a bit wider, and there are a few turnouts so one doesn't have to back up for miles to get out of the way when meeting someone.  The lower part of the road is still pretty narrow, but the snow isn't as deep and the one neighbor with the plow could go out and make some turnouts if he really wanted to.  So far, that hasn't happened.  He is very annoying.

I crocheted a baby blanket for a great-nephew that is due to make an appearance in March.  I used to really like crocheting, but now I'm liking needle felting a lot better.  I used commercial yarn in the blanket.  It's been a long time since I did that.  I couldn't find the end in the center, so I had to go from the outside on every skein but one.  That was a pain.  Those ends were hidden quite well!

Well, that's all that has happened around here lately.  I will be so glad when this winter is over and done.  We aren't having it as bad as some other parts of the country, but it's been a long one.  I think we will still have snow on the ground through April.  I have an idea the Kila wetlands are going to be totally flooded this year, like they were back in 2012.  There was a big lake stretching from the highway to the side of the mountain for a good two or three miles.  We were calling it the ocean. :-)

Hope everyone is surviving winter okay!
Posted by Ann Keenan at 6:38 PM 2 comments: 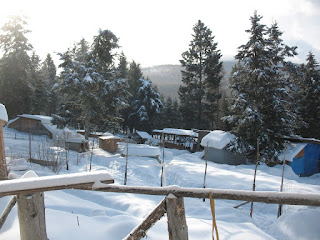 Well, the storm wasn't nearly as bad as predicted, although we got quite a bit.  We didn't get snowed in, although it was close.  The road is a very narrow one lane with no turnouts for the entire length, so it's interesting traveling it.  Had quite a time the other day coming home, when the neighbor ended up coming down at the same time as I was going up.  Trying to get around each other, we both ended up stuck, I had to pull her out twice.  I ended up putting on one chain on the front tire to get a grip on the ice, and then things got way better.  I did end up backing up for over half a mile till I got to a spot that wasn't quite as narrow with less snow than the rest of the road.  She barely got around me, and I barely got out of that snow bank. but I did and made it home finally.  This weekend we are going to all get together and widen the road and make some turnouts.  At least that's the plan.  We have had a major warm up and about half the snow has melted, so it should make it easier to widen the road.  It rained on top of the snow, so now the road is an ice skating rink on a hill.  Glad we have the truck and chains!  I haven't been out since Wednesday, and won't be going anywhere till Tuesday.

I'm back to combing goats.  Four more are done now.  They aren't all shedding yet, so I'm out there plucking at their sides as they walk by checking to see who's ready to be combed.  That isn't going over too well with most of them. :-)

I'm crocheting a baby blanket for a great-nephew who is due to arrive into the world in March.  I haven't done much crocheting lately.  Mostly needle felting is all I've been doing since last fall.  I did make a cowl and a scarf, but that's it.  I haven't spun anything for a long time!  Time to get back to that pretty soon.  So many things to do....
Posted by Ann Keenan at 9:55 PM 2 comments:

I think we could end up snowed in by Monday evening.  We are pretty close to being there now.  John drove the truck today to work so he could make it home.  The neighbor isn't keeping up with the plowing so there was 7 inches of new snow to go through.  The forecast is for up to 2 feet of snow by Monday night!  We will be snowed in then.  Good thing John has Monday and Tuesday off.
We are seriously running out of room to put the snow up here in our part of the driveway.  It's getting pretty small.  I am filling in around the loop at the bottom of our hill now.  I'll leave just enough room to get to the canopy holder for the pickup so I can take that off when I get hay, and the rest will end up filled in.  A snowblower is really what we need.  Seriously what we need.

I have 6 goats combed now.  I've stopped for a few days now, waiting for it to quit snowing and get back up into the 20s.  So far the cashmere is looking really nice this year.  No dandruff, lice or anything besides some hay bits. 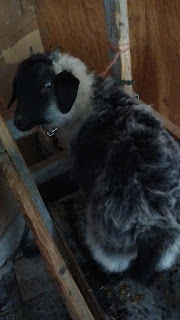 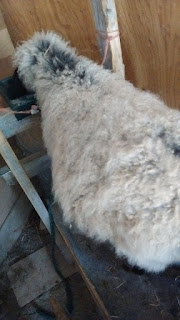 This is Shadow after and before combing.  She shrank quite a bit! :-)  Beautiful soft fleece.  With the combing instead of shearing, they still have their guard hair to keep them warm, so they are all doing fine without their cashmere.  I think once it starts letting loose, it doesn't give them the warmth it did when it was still growing and attached to their skin, so it feels good to them to get it off.
Well, that's it for now.  Back to shoveling trails and plowing. :-)
Posted by Ann Keenan at 3:12 PM No comments: