A Year in Review

2012 has been quite a year!  Lots of changes, new faces, opportunities, good things, not-so-good things, all have been learning experiences. 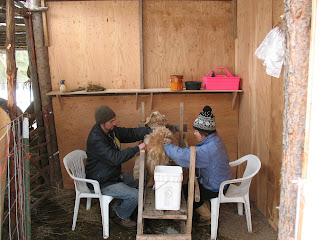 Starting in January with finishing up the dehairing of other people's cashmere, which took all of January, February and part of March to do.  Then came the cashmere harvest time.  I had help this year for the first time.  H and C were here, and they both got to bury their hands in the soft fiber of the goats.   Here they are combing Wilbur, who wasn't exactly sure he was going to survive this experience, since it was his first combing ever.  H&C did a good job with the combing. 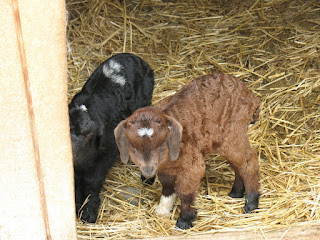 Then came kidding season, with all it's trials and tribulations this year.  This was the most difficult kidding season I've ever had.  Starting with Ariel aborting her twins 21 days early, then going blind for two weeks! She's fine now, and pregnant again, so hopefully all will go smoothly this time around.

Belle had twins this year, with one of them being born a whole hour later than the first one.  She came out all crooked and almost dead, just barely breathing.  I left her out there with Belle for an hour, thinking Mother Nature would decide what happened.  I went back out there and she was still breathing and Belle was still cleaning her up and trying to get her moving.  I decided with a will to live that strong, that I would try and save her.  So into the house she came.  I spent the rest of the night getting her warm, stomach tubing her mom's colostrum into her, and getting her going.  She actually lived!  I named her Sweetpea.  She was still pretty crooked, and deformed, but amazingly enough, she thrived, getting a little straighter with every week.  This picture was taken the day before I took her to her new home down by Elmo.  She is now a very well loved pet of a really nice woman who is very happy she has her.  I cried when she left, she was my little baby, but she is in such a good home now, I'm glad I let her go.  She is now almost totally normal, no visible crookedness left!

Spice had triplets, two of which are in the above picture.  The little brown one ended up having to be put down, one of the hardest, saddest things I've ever had to do.  He had such a distinctive "foghorn" voice!  I will always remember that.  I remember holding him one day giving him his supplemental bottle and just getting this "knowing" that he wasn't going to be around much longer, and sure enough a few days later, I had to put him down.  One of the other goats must have stepped on him or something, breaking his back.  He couldn't stand, just lay there on his side flailing his legs.  Very sad....

Then April had complications with a single kid that was too big to come out, entailing a trip to the vet, a dead kid, and then April herself dying 24 hours later from having constant contractions that wouldn't quit!   They wore her out and she died from them.  There wasn't anything I could do to stop them, even after calling the vet more than once.  She was my highest producing goat, giving me 6.2 ounces of dehaired cashmere!   Big vet bill and two dead goats to show for it.  Not a good time!

There were 18 healthy bouncing kids born, so all wasn't bad.  H&C got the full spectrum of goat raising 101, the good, the bad, and the ugly.  They still want to have them someday, so that is good!

Then Spring came, everything turned green and the yard and garden work began.  H and C moved out in May on a rainy cold day.  Then I signed up with the Help X exchange site, and had some new helpers come and go.  They were all a great help and fun to have around.  The goats got well-fed out in the forest all summer and into fall.
I did some more dehairing of outside cashmere, mostly from Canada, throughout the summer and into fall, then finished mine.
A deer or two ate 90% of the garden this summer.  I did get some great asparagus, salad greens, some peas, a meal or two of green beans and a decent strawberry harvest before the deer ate it all.  New fencing is in store this coming year!  I also got a great garlic harvest, a few carrots, and lots of apples, which I just finished up tonight with a cranberry-apple crisp I made.  Yum!

I've sold all the cashmere I wanted to sell as cloud this year.  Now I just have to spin up the few ounces I have left into yarn and make a couple of accessories to sell, and I'll have it all gone.  A good feeling!!

Now it's on to 2013 and all the good things that year is going to bring.  More adventures, lots of cashmere to harvest, new kids, new helpers, and a good garden with no deer invasions, just to name a few of the upcoming good things in store for Pine Needle Farm.

The Perfection of Silence

Tonight as I was doing the evening chores, I stopped for a couple of moments and just stood there, listening to the absolute silence.  The sun was setting through the clouds, the air was still, all the animals were quiet.   It was a magical moment in time.  Made me appreciate where I live even more.  No human sounds at all.
Then the neighbors started their generator and that was the end of that. ☺  I should do that, too.
Our batteries for the solar power system are worn out.  They gave 9 good years of service, but now they are just not holding a charge anymore.  I am having to run the generator twice a day most days.   I think I probably shortened their lifespan when I first got the dehairing machine by deep cycling them too many times running the machine after dark, trying to get everyone's cashmere dehaired in a timely manner.  The machine doesn't like to run off the generator power, there is a little too much fluctuation in rpms for it to run smoothly. It will do it, but it doesn't sound as good as when it's off the solar power.  So I would wait till I was done for the night, then turn on the generator to recharge the batteries.  There were a few times when my husband came running down yelling that the batteries were way too low and to turn off the machine.  Next set of batteries will be treated better. :-)
Now we just need to somehow come up with that money, which is in the thousands for as many batteries as we need.  Iron Edison has a 25 year battery which would be a really good thing to get, as opposed to the regular ones that last on average, 6 to 10 years.  Of course, they are way expensive, too, but in the long run, cheaper than buying a set every few years.  Whatever we get will be the third set in 18 years, so that's not too bad.  The first ones didn't last very long, they were our "learning" batteries.  It's amazing how much hands on you have with your own off-grid power system.  One learns to really watch their electrical consumption!

The goats are all doing well.  There are 14 pregnant does out there, at least I think they have all settled now.  Midnight got quite a workout this year!  I'm looking forward to seeing what his kids look like.  I've only got three that he's thrown from last year, and the year before.  They are all well covered in excellent cashmere, so I hope all these coming will be, too.  It's always fun to see what comes out each year.

Today I discovered that the ATV will actually pull the drag plow!  I've always thought it was too big and heavy for the ATV to pull it through snow to plow.  Sometimes the truck has a hard time.  But, today I plowed the whole driveway with it with no problem.  I almost got stuck turning it around out on the forest service road, though.  I had to really gun it and hold on in a circle to get it turned around.  The drag plow sure saves a lot of time.  It cuts a 10 foot swath, while the ATV plow only does a four foot swath.  Much faster at 10 feet!  :-)

Well, that's all for now.  I am sure enjoying the mostly mild winter we are having so far.  Only 5 or so inches of snow on the ground now.  It's been above freezing again, too, so the snow is settling down good.  Haven't had to have to the forest service road plowed yet, so this is good!
Posted by Ann Keenan at 8:37 PM No comments: