Winter struck with a vengeance!  After having a pretty mild, mostly snowless early start, February has been somewhat brutal.  We have over two feet of snow, it's been really cold for most of it, with brief warm ups that are actually hard on the animals.  Going from 40 degrees to 0 degrees in a matter of hours is hard on their little bodies.

Timmy is still in the house, will be till spring.  He's pretty lucky being in where it's nice and warm.  His brother is out with the other goats in the cold.  His mom ended up dying in the last below 0 weather spell.  She was old and weak and just couldn't handle that amount of cold.  I had her in a low-roofed house with a lot of hay and straw all around her, but her heart gave out during the night.  So now I'm watching Tommy carefully to make sure he is keeping weight on and is okay.  Neither Timmy or Tommy are very hearty goats.  Tommy is more so than Timmy, though.  I sure hope he can survive out there on his own, I don't think my husband, or me, for that matter, could handle two goats in this little house.  Timmy is now pretty much trained to pee on the absorbent pads, but he still will poop wherever.  He is starting to contain his poops to one or two areas instead of all over, so we are making progress.

One thing about being off-grid, I can't have any heat lamps or anything like that, it takes too much electricity and would ruin our batteries if one was on all the time.  So my goats need to be hardy critters, which, thankfully, cashmeres are.  I sure would like to have a heat lamp out there for Tommy, though.  He does seem to be doing okay all by himself.  He has a low-roofed house with lots of bedding, so he's staying warm.  He eats better than Timmy, too.

My weaving is getting a little better with each thing I make.  I'm still chicken to use my cashmere on the floor loom, though.  One of these days....

I'm spinning up all the ruined cashmere from a few years ago into rug yarn and am going to make a rug with it all.  I think it will work good for that.  I'm spinning it a bit thicker than my normal size, which is a challenge.  I'm used to spinning a fine yarn, and making a thick rug yarn takes some concentration!  Plus, all the pills and noils in it I'm having a hard time just working those into the yarn.  I want to keep stopping and picking them all out, which is impossible.  I will post pictures of the rug when I get it done, which will probably be sometime this summer.  We have a fox around here!  I haven't seen one in years, but it's on the game camera.  Cool!  I'm not worried about it getting anything, the guard dogs will keep it far away from the chickens and goats.  I'm glad it's around, and I hope it stays around.  It will be good to catch all the pack rats that migrate to our place every fall.  We have a neighbor that has a lot of junk at his place that is a perfect breeding ground for the little beasts.  The neighbor doesn't live there, just has a bunch of junk piled up.  Between the bobcats, coyotes, and now the fox, I hope the rat population goes way down, or even disappears entirely from here. 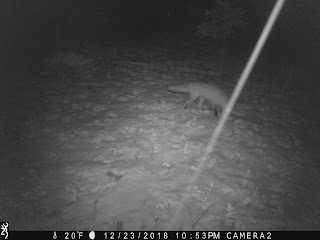