Time to downsize the buck population around here.  Moonshine and his son Thunder are looking for new homes.  They are related too closely to 99% of the does here, so I can't use them.   They need a new batch of girls to go to.  Moonshine is only 3 years old, and Thunder is just a yearling.  He does need his feet trimmed, which I will don my coveralls to do so I don't end up stinking like him. 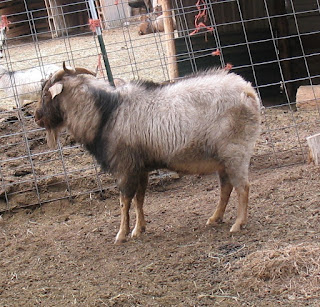 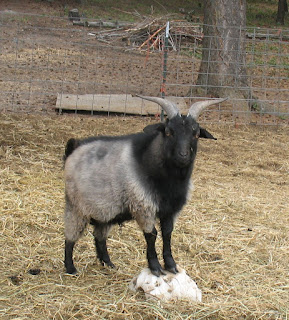 I made 3 of these "farmhouse" towels recently on my rigid heddle loom.  They turned out quite well.  I'm in the process of making a new warp for my floor loom and using the warping board for the first time to do it.  So far it's working out pretty good.  As long as I remember which way to go around the pegs at the cross, I'll be okay.  Once nice thing about having a sectional warp beam is I only have to do 48 threads at a time.  Each section gets wound on separately, so I think I'll be okay with this!  I must say, warping a rigid heddle loom is much faster and easier I think. :-) 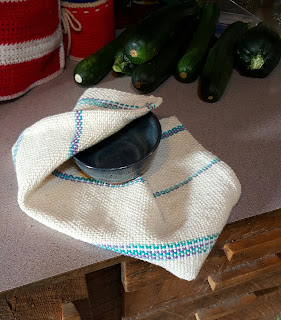 We are, after 24 years, finally getting the driveway graveled!!  This year is mainly filling in the big puddle/pond we have to drive through every spring.  No more having to drive through water!  Yay!!  Even though we are supposed to have a warmer and drier winter than last (thank heavens!) I still think we will have enough snow that in the spring there will be standing water, at least for a little while.  But, not in the driveway!  That is going to be so nice!! I will post a picture or two after it's all done.  If you follow me on Instagram @cashmereannie you can see in progress photos, plus about a thousand other pictures of happenings on the place.

Jimmy, the boer/nubian buck I had went to a new home and batch of girls this week.  It is so much quieter and less smelly around here now that he's gone!  He was the noisiest buck I've ever had.  He makes some pretty strange sounds when in rut. :-)  He is also a very manageable guy.  Even in full rut, with a doe in season, he let me put his collar and leash on, lead him through the pen, down the driveway, and he jumped right in the back of the truck to eat his little grain treat I had for him.  Then when we got to the veterinary to get his blood drawn, he was patiently standing around waiting for over a half hour without making a fuss, and stood perfectly still while the needle poked into his neck and the blood was extracted.  Then when we got to his new place, he jumped out and walked beside the new owner to his new pen, taking in everything calmly and curiously.  Too bad I couldn't use him around here anymore, there aren't too many bucks that calm and easy going out there!  None of my cashmere boys have been, anyway.

I am now the president of our local weavers and spinners guild for next year!  This could be interesting.  I have a really good vice-president, so between her and I it should be a fun year.  The rest of the board is very competent, too, so I will have an easy job, I think.

Well, that's it for this session.  Hope you are having a great autumn and winter won't be too hard on you, wherever you are.  I am seeing the east is supposed to have a bad winter this year, so I hope it isn't overwhelming to anyone!
Posted by Ann Keenan at 9:25 PM